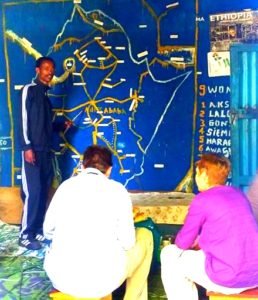 the Danakil desert area: north of the Mille-Djibouti and Mille-Chifra roads, and east of the towns of Bere-Ale, Shehet, Didigsala and Chifra
the four woredas (districts) (Akobo, Wantawo, Jikawo and Lare) of the Nuer zone and the Jore woreda of the Agnuak zone of the Gambella region
The FCO advise against all but essential travel to:
west and south-west Shewa zones in the Oromia region (this area includes the popular tourist destination of Wenchi Crater)

Jijiga town
Three woredas of the Agnuak zone of the Gambella region that border on South Sudan (Dima, Goge, and Etang) and the Gambella Wildlife Reserve (taking into account the advice against all travel to within 10km of the border with South Sudan)
There was an explosion at the Anwar Mosque in the Merkato area of central Addis Ababa on 11 December. You should remain vigilant.

You should be vigilant at all times, especially in crowded areas and public places like transport hubs, hotels, restaurants, bars and places of worship and during major gatherings like religious or sporting events. There is a high threat of
Take out comprehensive travel and medical insurance before you trave