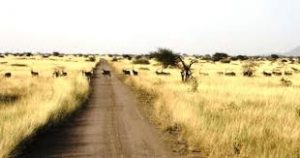 Awash National Park was chiefly established because of its range of larger wildlife species, particularly with a special emphasis to the fascinating number of Beisa Oryx and natural beauty of the area as a major tourist attraction. The park was established in 1969 GC and it is home to 81 mammal species, 458 bird species, more than 43 reptile species and over 400 plant species. It is located in the northern part of the Great Rift Valley at the point where the rift widens out into the Afar depression. Both Oromia and Afar regions encompass the park boundary. Its altitude ranges between 750-2007m above sea level (at the summit of Mt. Fantalle). The head quarter is situated at a place called ‘Gottu’, 215 km east of Addis Ababa.

The park experiences two distinct rainy seasons: the season beginning in February and extending to the end of April and the long rains in July to September. The average annual rainfall of the park and the surrounding is about 570 mm with temperatures ranging between 320C and 420C on the maximum, and between 9.60C and 220C on the minimum. From late October through January is the period of the lowest monthly daytime and nighttime temperatures.

There are also some bird species in the park like the Banded barbet, Golden-backed woodpecker, White-winged cliff-chat, Thick-billed raven, White-billed starling, Secretary bird, bustards and storks.

The major physical features of this park are Fantalle Crater, Filwoha hot springs, Lake Basaka and Awash River with its waterfall and gorgeous is scenic features. The park is on the most geologically active region.

Located at the southern tip of the Afar Region, this park is 225 kilometers east of Addis Ababa. The south boundary of the park is formed by the Awash river which swings north soon after leaving the park and eventually disappears into the Afar (Danakil) region. The Park covers an area of 827 square kilometers, most of it lies at an altitude of 900 meters. In the middle of the park is the dormant volcano of Fantale, reaching a height of 2007 meters at its top.

It is one of Ethiopia’s most popular and interesting national parks. One of the advantage of the Awash National Park is that it is easily reached from Addis Ababa, located on the main Addis-Assab highway, which bisects the park. The main road from the town of Melehara leads to the park headquarters and the campsites, both of which are situated near the dramatic Awash Falls where the river enters its gigantic gorge.

The park is traversed by a series of well-maintained tracks, which take in the most spectacular of the many scenic attractions. One of the main features is the Fantale volcano, on the southern flank of which can be seen the dark scar of the latest lava flow of 1820. The mountain slopes hold evidence of sixteenth-century habitation, seen as remains of walls and settlements of considerable proportion. The interior of the mountain-top crater — with its wispy white breath of steam vents — is still used by the local people, the Kereyu, for grazing livestock on a seasonal basis.

Another feature of the park arc the hot springs in the extreme north. The water of these springs and rivers is in the region of 36°C (97°F) and is used by the local people to water stock.

The plains to the south of the main road are excellent for animal viewing and are bordered to the south by the Awash Gorge, Plunging 250 metres (820 feet) to the river. The western end of the Gorge is marked by the Awash Falls, which can vary in intensity from a murky reasonable flow to a raging chocolate-coloured torrent, depending on the rainfall and the activity of the hydro-electric scheme above it.

Awash’s wildlife reflects its dry nature:. The Beisa oryx inhabits many of the more open areas, and greater and lesser kudu the bushed areas. Soemmerring’s gazelle have distinctive white rumps and are often seen with the oryx. A small population of the endemic sub-species Swaync’s hartebecst was translocated here and occupy the grass plains. The liny Salt’s dik-dik appears frequently under the dry acacia bushes and Defassa waterbuck arc seen in the bushy river area. There are two species of baboon — the Anubis and the hamadryas. Though each has very different social structures, they hybridize near the river. Other monkeys are colobus in the riverine forest, and grivet in drier areas. Fan tale crater provides a different habitat, supporting mountain reedbuck and klipspringer. Croco¬dile and hippopotamus splash in the Awash River and in the cooler parts of the springs and rivers in the north. Lion, leopard, serval, caracal, and wildcat are all seen infrequently.

The birds are numerous, more than 300 species on record. The campsites are an excellent place to sight birds. There, above the quiet murmur of the river, one can hear the exuberant chatter of greenwood-hoopoes, the rollicking duel of red-and-ycllowbarbets, or the soft lament of the emerald-spotted wood dove — to name only a few. Carmine bee-eaters manoeuvre over the water, homing in on their airborne prey.

There are several bustard species in the park and secretary birds in the grass plains. The raptors are represented by Fish eagles, tawny eagles, lanner and pygmy falcons, black-shouldered kites, and dark chanting goflfmwky. Ree-eaters and kingfishers provide splashca of colour, as do rollers. Ostriches roam the plains and the- immense lammergeyer soars above Fantale searching for bones to smash.

Bordering the park, a twenty-eight-kilometre (17-mile) stretch Of the Awash River offers a superb one- or two-day rafting trip — if the water level allows it — featuring lots of spirited rapids, wildlife, and impressive rugged cliffs and side canyons. The trip starts at the Awash Falls and ends at the beach below the town of Awash Station, with an optional overnight at a small hot springs sacred to the Kercyu people.