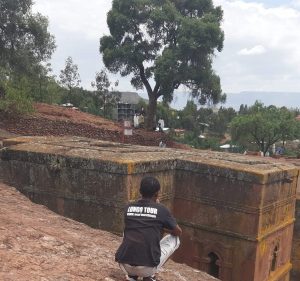 Even after the Seven Wonders of the World have outworn their wonder, the rock hewn churches of Lalibela will always remain intriguing, fascinating and mysterious to any visitor. It is an awe striking phenomena that will always bamboozle any visitor and compel him or her to rediscover the true meaning of wonder.

The creation of these rock-hewn churches is ascribed to one of the last kings of the Zagwe dynasty, St. Lalibela, who reigned around the 12th Century A.D. The magnificence of these churches remains hard to believe that it was entirely the hand of man. History records that angels worked alongside the stone-masons during the entire twenty four years it took to complete the work. These 10 magical rock-hewn churches are regarded as high places of Ethiopian Christianity and this wonder was inscribed by UNESCO in 1978. The local and native historians bear witness to the importance of the King-Gabre-Meskal (Servant of the Cross) Lalibela in construction of the churches. He is considered an epitome of sanctity, having lived a more severe monastic life than before. These historians also ascertain that King-Gabre-Meskal Lalibela and the other Zagwe dynasty kings had Solomonic descent, an attribute that gave them legitimacy of ruling Ethiopia.

Lalibela is considered to be the New Jerusalem. At that time, a pilgrimage to the real Jerusalem was not really possible. The Lalibela churches, however, silence the most cynical pedants with the fact that today thousands of pilgrims are flowing to this sacred place of Christianity. These intriguing edifices hewn out of the solid, red volcanic tuff seem a superhuman creation in scale, in workmanship and in architectural concept. They are ringed by trenches and courtyards, which are connected to each other by a tangle-shaped maze of tunnels and a passageway which gives the inside of the church complex a feeling of a subterranean village. However, this historical relic remains an active Christian shrine and has been for the last 900 years.

In addition to the churches found through the Yemrhane District, Asheton Maryam monastery which can be accessed by mule ride or walk, Neakutolab and GenetMaryam rock hewn churches are also very fascinating and interesting sites.

Further exciting activities and tours can be arranged in and around Lalibela such as Days of trekking, farm visit, cookery school training and so much more.

In a mountainous region in the heart of Ethiopia, some 645 km from Addis Ababa, eleven medieval monolithic churches were carved out of rock. Their building is attributed to King Lalibela who set out to construct in the 12th century a ‘New Jerusalem’, after Muslim conquests halted Christian pilgrimages to the holy Land. Lalibela flourished after the decline of the Aksum Empire.

The churches were not constructed in a traditional way but rather were hewn from the living rock of monolithic blocks. These blocks were further chiselled out, forming doors, windows, columns, various floors, roofs etc. This gigantic work was further completed with an extensive system of drainage ditches, trenches and ceremonial passages, some with openings to hermit caves and catacombs.

Biete Medhani Alem, with its five aisles, is believed to be the largest monolithic church in the world, while Biete Ghiorgis has a remarkable cruciform plan. Most were probably used as churches from the outset, but Biete Mercoreos and Biete Gabriel Rafael may formerly have been royal residences. Several of the interiors are decorated with mural paintings.

Near the churches, the village of Lalibela has two storey round houses, constructed of local red stone, and known as the Lasta Tukuls. These exceptional churches have been the focus of pilgrimage for Coptic Christians since the 12th century.

Criterion (i): All the eleven churches represent a unique artistic achievement, in their execution, size and the variety and boldness of their form.

Criterion (ii): The King of Lalibela set out to build a symbol of the holy land, when pilgrimages to it were rendered impossible by the historical situation. In the Church of Biet Golgotha, are replicas of the tomb of Christ, and of Adam, and the crib of the Nativity. The holy city of Lalibela became a substitute for the holy places of Jerusalem and Bethlehem, and as such has had considerable influence on Ethiopian Christianity.

Criterion (iii): The whole of Lalibela offers an exceptional testimony to the medieval and post-medieval civilization of Ethiopia, including, next to the eleven churches, the extensive remains of traditional, two storey circular village houses with interior staircases and thatched roofs.

The drainage ditches were filled up with earth for several centuries, before being cleared in the 20th century, and have been disrupted by seismic activity. This has resulted in a severe degradation of the monuments from water damage, and most of them are now considered to be in a critical condition.

Structural problems have been identified in Biet Amanuel where an imminent risk of collapse is possible, and other locations need to be monitored. Serious degradation of the paintings inside the churches has occurred over the last thirty years. Sculptures and bas-reliefs (such as at the entrance of Biet Mariam) have also been severely damaged, and their original features are hardly recognisable. All of this threatens the integrity of the property.

Temporary light-weight shelters have now been installed over some churches and these, while offering protection, impact on visual integrity.

Other threats include encroachment on the environment of the churches by new public and private construction, housing associated with the traditional village adjacent to the property, and from the infrastructure of tourism.

The Rock-Hewn Churches of Lalibela are still preserved in their natural settings. The association of the rock-hewn churches and the traditional vernacular circular houses, in the surrounding area, still demonstrate evidences of the ancient village layout. The original function of the site as a pilgrimage place still persists and provides evidence of the continuity of social practices. The intangible heritages associated with church practices are still preserved.

For centuries, the Church and State have been jointly responsible for the holy site of Lalibela. Home to a large community of priests and monks, it is a living site which draws many pilgrims to celebrate the great feasts of the Ethiopian Christian calendar. This active and energetic perspective is central to the management of the site.

No special legal framework is provided to protect the Rock-Hewn Churches except the general law, Proclamation No. 209/2000, which has also established the institution in charge, the Authority for Research and Conservation of Cultural Heritage (ARCCH). With the Ethiopian Church as a partner, the ARCCH has a representative in Lalibela but a principle difficulty has been the harmonization of the different projects and effective coordination between the partners.

The property is administered under the regional and the Lasta district culture and tourism office. To prevent the property from the impact of development, a draft proclamation has been prepared but this is not yet ratified. A management plan has not yet been established. A four year Conservation Plan was established in 2006 but this has yet to be fully implemented.

There is a need for stronger planning controls for the setting of the churches that address housing, land-use tourism and for a management plan to be developed that integrates the Conservation action plan, and addresses the overall sustainable development of the area, with the involvement of the local population.