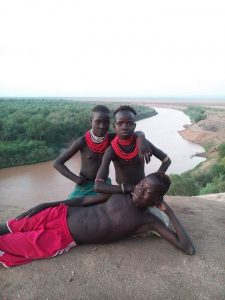 Unique physical feature: the highest point is mount Mago (2528m) situated in the north of the park

The Mago National Park was established in 1979, making it the newest of Ethiopia’s several National Parks. Its territory embraces savanna, acacia forest, and the Neri Swamp. Its highest point is Mount Mago. The park’s perhaps best known attraction are the Mursi people, who inhabit villages along the Omo, known for piercing their lips and inserting disks made of clay.

Visitor Facilities: Campsite by Neri River near the headquarters of the Park.

Mago National Park is located in the Southern Nations, Nationalities, and Peoples Region about 782 kilometers south of Addis Ababa and north of a large 90° bend in the Omo River. The landscape consists of reverie forest, wetlands along the lower Mago River and around Lake Dipa. Also there are mountainous areas with great views over the bush savanna.

Mago National Park which is an extremely isolated place is situated eastern shores of river Omo. The park stretches over of 2,162 sq km of land and its landscape is dotted with thick acacia shrubs, Ethiopian deserts and rising and falling grasslands. Its possession of a rich wildlife population is credited for its presenting the best wildlife scenery in the whole of Ethiopia. Mago is one of the most recently established national parks in Ethiopia; it was recognized in 1979.

The park lies on the eastern sides of a small branch of the eastern Rift Valley (Omo depression), bordering Omo National Park divided by the Mago River, a tributary of the Omo. To the west is the Tama Wildlife Reserve, with the Tama River defining the boundary between the two.

Mount Mago that rises to a height of 2528 meters is the highest geographical spot in the park, and it’s from this that the park was named. The savanna grasslands dominate the landscape in and around the park with just a few forest patches found around the flowing rivers. In addition to a number of wetlands that surround Lake Dipa and the lower regions of the park, existent are shrubs dotting the park’s hill sides.

Other than the large population of elephants, giraffes and buffalos for which the park was primarily established to safe guard, there are more than 56 different animal species such as hartebeest, topi and lelwel. Other resident animals in Mago National Park include: lions, leopards, Oryx, gerenuks, the great Kudu and zebras. Notably, the park has very thick bushes that make game viewing very difficult. During your tour through Mago National Park, you will hear lots of birds singing in the dense acacia shrubs and in the hilly grasslands but you won’t be able to make much progress to see them.  However the most popular and significant tourist attractions in the park are the Mursi renowned for interleaving disks made out clay and pricking their lips.

There are several bustard species in the park and secretary birds in the grass plains. The reverie forest along the Omo River is important for several different bird groups, including herons and egrets, kingfishers, barbets, chats and thrushes, woodpeckers, pigeons, shrikes, warblers and flycatchers. Also there are guinea fowl, bee eater and lots of different species of eagles. The Park has over 237 bird species have been recorded. Of these six are endemics namely Banded Barbet, White-Winged Cliff Chat, White-Tailed Starling, Thick-Billed Raven and Wattled Ibis. The typical species like bustards, hornbills, weavers and starlings. Omo River attracts birds from other parks like Omo Park and common water birds like Kingfishers and herons can be seen around the river.

One of the major attractions of the park is the Hot Springs and areas along the lower Omo (within the park) are populated with a rich diversity of ethnic groups, including the Aari, Male, Banna, Bongoso, Hamar, Kwegu, Karo and Mursi peoples.