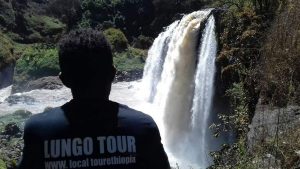 Lake Tana, the largest lake in Ethiopia, lies north of the beautiful town of Bahir Dar. It is endowed with wide, palm lined avenues and gardens overflowing with tropical vegetation. It is the source of the famous Blue Nile, the longest river in the world.

It is from here we have the Blue Nile waterfalls as well as a number of historic lakeside churches. These churches include, Dek Stephanos with its priceless collections of icons and the remains of medieval emperors, Kebran Gabriel and Ura Kidane Mehret, offering great attraction sites. There are 37 islands on the lake which are home to more than twenty churches and monasteries of great historical and cultural interest and are also repository of innumerable treasures.

Bahir Dar’s colourful local market is renowned for its weavers and wood workers. They sit alongside a panoramic viewpoint nearby the Late Emperor’s palace. This is another ideal viewpoint for friends, families, and couples to bask in the African sun set. The lake shores town Bahir Dar is fast gaining popularity as a resort town as well as a get way venue for tourists visiting the North.

Thanks to their remote location, the monasteries of Lake Tana have remained hidden for centuries, guarding their treasures against intruders from foreign lands and the passage of time. For those who know where to find them, however, a short boat trip across the lake is all that is needed to discover these hidden gems of antiquity. Step on board and your local guide will take you on a travel back in time.

Monasteries on the islands
Debre Maryam

The monastery of Debre Maryam is one of the newer monasteries of Lake Tana, having been built by Emperor Tewodros in the 19th century. A friendly priest welcomes all visitors and is happy to show you the ancient manuscripts stored there. It can be accessed by boat and a short walk through coffee, mango and fig trees that line the path. More adventurous travellers can rent a tankwa papyrus boat from locals, 20 minutes on the road towards Gondar, just before the Nile bridge.

Set on a hill around 100m above the lake, a short trek up a winding path brings you to one of the most sacred monasteries, the monastery of Daga Estefanos. This monastery is of real historic interest, housing brightly coloured ceremonial robes, a 16th century painting of the Madonna and the mummified remains of five Ethiopian emperors, displayed for visitors to view in modern, glass-sided coffins. It will take 2:30 -3:00 hours by moderate speed boat from Bahir Dar to reach this monastery. Only men are permitted to enter this monastery due to religious reasons.

Narga Selassie, which means ‘Trinity of the Rest’, was built on Dek Island, the largest island of Lake Tana in the late 18th century. The church is one of the most peaceful and atmospheric on Lake Tana and is set in an extremely beautiful location. It will take 3:00 -3:30 hours by moderate speed boat from Bahir Dar to reach this monastery.

Tana Cherkos is a small island monastery where it is said the Ark of the Covenant was hidden for 800 years before being brought to its final resting place in Aksum. The shores of the island are covered with a dense forest strip which is home to majestic fish eagles. It takes around three hours to reach this monastery by boat from Bahir Dar.

Sadly, although it is said to be one of the most beautiful and atmospheric of the monasteries of Lake Tana, Kebran Gabriel is no longer open to the public. It was founded in the 14th century and rebuilt in the 17th century. It is located the closest to Bahir Dar. The round roof is supported by twelve pillars made from carved stones symbolising the twelve apostles. It will take 20 minutes by moderate speed boat to reach this monastery and is often visited on the way to Zege peninsula. Only men are permitted to enter this monastery due to religious reasons.

Monasteries on the Zege Peninsula

The rich forests on the Zege Peninsula are home to seven ancient monasteries waiting for you to visit. The peninsula can easily be reached by boat or bicycle from Bahir Dar. Do contact the local guide association (Getaneh – +251 – (0) 918701906, English and Amharic) to arrange for guided tours to Ura Kidane Mihret and special tours (e.g. on coffee, hiking, etc.).

Is has been said that the inside of the Ura Kidane Mehret monastery is the most impressive and beautiful in the whole region. Just a 25 minute walk from the boat landing point will take you to the monastery, winding through coffee plantations under tall shady trees. The monastery is highly decorated with beautifully painted, colourful and vibrant frescoes depicting Ethiopian saints and the history of the Ethiopian-Orthodox Church. Both men and women are permitted to enter and there is also a small museum, the Zege Satekela Museum, for visitors to learn about hand-crafted objects and musical instruments that are still used be the local communities today.

A short walk on a path through coffee and lemon trees leads you to the oldest monastery on the peninsula, the Bete Maryam monastery. Attractive murals are sheltered behind stone columns here.

This round church has a thatched roof which makes it one of the most attractive churches around Lake Tana. Step inside and watch its paintings come alive.

Bete Selassie & Tekla Haimanot
Just a 45 minute walk uphill from the shore takes you to these two hidden treasures. These two monasteries are slightly off the beaten track, making a trip to see the vivid frescoes inside even more special.

Known locally as Tis- Isat Falls – ‘Smoke of Fire’ – the Blue Nile Falls is the most dramatic spectacle on either the White or the Blue Nile rivers. 400 meters (1,312 feet) wide when in flood, and dropping over a sheer chasm more than 45 meters (150 feet) deep, the falls throw up a continuous spray of water, which drenches on lookers up to a kilometer away. This misty deluge produces rainbows, shimmering across the gorge, and a small perennial rainforest of lush green vegetation, to the delight of the many monkeys and multicolored birds that inhabit the area.

To reach the falls, which is about 35 kilometers (22 miles) away from Bahir Dar, drive south from Bahir Dar for about half an hour, and stop at Tis-Isat village. Here travelers will quickly find themselves surrounded by a retinue of sometimes overzealous youthful guides who, for a small fee, will show the way and point out several places of historic interest in route.

After leaving the village the footpath meanders first beside open and fertile fields, then drops into a deep rift that is spanned by an ancient, fortified bridge built in the seventeenth century by Portuguese adventurers and still in use. After a thirty-minute walk, a stiff climb up a grassy hillside is rewarded magnificent view of the falls, breaking the smooth edge of the rolling thundering cataract of foaming water.

A rewarding but longer trek is to walk along the east bank all the way to the back of the falls; crossing the river by tankwa.
The site overlooking the waterfall has had many notable visitors including Queen Elizabeth II of Britiain.