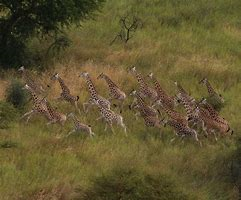 Key species: the park contains 41 species many representative of neighbouring Sudan and not found else where in Ethiopia, Such as Nile lechwe and the white-eared kob, the latter migrating in large numbers. Roan Antelope, Topi, Elpephant, Buffalo, Lelwel hartebeest, Lion and Giraffe are also present. There are also 154 bird species. Such as the Whale-headed stork, an unusual large billed, tall bird has seen standing in the swamps.
Unique feature: largest wet land in the country including 4 big rivers.

General Description: The Baro River area, accessible by land or air through the western Ethiopian town of Gambela, remains a place of adventure and challenge. Traveling across the endless undulating plains of high Sudanese grass, visitors can enjoy a sense of achievement in just finding their way. This is Ethiopia’s true tropical zone and here is found all the elements of the African safari, enhanced by a distinctly Ethiopian flavor.
Visitor facilities: No development yet.

Gambella National Park is located in the Gambella Region and it covers 5,061 square kilometers. It was established in 1973, it is 15 kilometers southwest of the city of Gambella, where the park headquarter located. The northern boundary is surrounded by the Baro River. About 66% of the area is considered shrubland, 15% is forest and most of the remainder has undergone human modification. The park also supports large tracts of wet grasslands and swamps where the grasses grow over three meters in length.

It is 850 km away from the bustling capital Addis Ababa. Out of all National Parks in Ethiopia Gambella National park stand tall in the richness of wildlife. The large conservation area of the park contains many species not found elsewhere in the country, such as the Nile lechwe, the white-eared kob, Roan antelope, topi, elephant, buffalo, giraffe, and the unusual whale-headed stork are also to be found in the park. The elevation of the park is ranging from 400 to 768 meters, and it has extended grasslands, marshes, river forests and savannahs in the Eastern part of the park.

The park is situated in a lowland plain, but there are some areas of higher, often rocky, ground with deciduous woodland and savanna, as well as large termite mounds. Gambela National Park supports extensive areas of wet grassland and swamps. The average annual rainfall is 1,400 millimeters (55 in); there is a wet season from May to October and a dry season the rest of time. The park is mostly flooded from August to October. The average temperature is 27 °C, with signification variation.

Gambela Park was focused on protecting three endangered species: the African elephant, Nile lechwe, and shoebill stork. The peak of the annual antelope migration occurs from January to March. Several birds only found in this area include the long-tailed paradise whydah and the red-throated and green bee-eaters. One of the major attraction of Gambella National park is the Baro River. The Baro River (Amharic: ባሮ ወንዝ Baro Wenz, known to the Anuak as Upeno River) is a river in southwestern Ethiopia, which defines part of Ethiopia’s border with South Sudan. From its source in the Ethiopian Highlands, it flows west for 306 kilometers (190 mi) to join the Pibor River. The rivers host large populations of Nile Crocodiles.