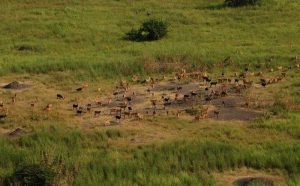 Nechisar National Park was essentially established due to its prolific wildlife of the Nechisar plains, especially Burchell’s Zebra. The other features include the spectacular scenery; large number of crocodiles and hippopotamus in the lakes Chamo and Abaya. Nechisar National Park is located south of Addis Ababa within an altitude range of 1,108-1,650 m above sea level and experiencing an average of 800mm of rainfall annually. The wet seasons are between April and June; September and October, and the driest season lie between December and February. Temperatures in the Park range between 36o to 39oc in December to February; and 20-21oc in April to June. The Head Quarter is situated 500km from Addis Abeba, near Arbaminch town in Gamogofa zone.

The major geological features of the park include: lakes Abaya and Chamo, Rift valley escarpment, Kulfo ground water forest and Filwoha hot spring. Nechisar National Park ranks as one of the most beautiful places in the tropical savannas with its outstandingly scenic part of the rift valley floor between the two lakes, Lake Araya and Chamo.

The word (s) Nech sar in Amharic literally means White grass and it refers to the grassy plains which are associated with the Burchell’s zebras and are the park’s most striking feature. The escarpment stretching between Chamo and Abaya lakes is locally referred as the Bridge of God, giving rise to a legend that both lakes were once one entity.  The park provides wonderful grounds for hikes especially along the Kulfo ground water forest to discover the origin of the forty springs set at the base of the cliff. There is a pool associated with these springs for additional enjoyment by the swimmers. There is also the hot spring South-East of the park, another great attraction site, together with a fringing forest of Sermalle River.

It is also possible to tour the lakes, with Lakes of Chamo and Abaya being among the best in Ethiopia. Lake Excursion provides spectacular large population of crocodiles (especially crocodile market of Lake Chamo) and hippopotamus. Both lakes are also great for birdlife and sport fishing. This park is accessible by air and also by road.

Nechisar National Park is situated 510km south of Addis near the town of Arba Minch, in between Lakes Abaya and Chamo. From the town on the ridge of land that divides Abaya and Chamo there are commanding panoramic views all around, including both lakes with Nechisar on the eastern side and, to the west, the Guge range of mountains. The outstanding beauty of the neck of land between the two lakes has earned it the sobriquet of’Bridge of Heaven’. The equally poetic Arba Minch – meaning ‘forty springs’ – takes its name from the bubbling streams which spring up amid the undergrowth of the luxuriant groundwater forest that covers the flats beneath the town. This alluring area is considered one of Ethiopia’s last great surviving wildernesses.

A wide variety of plains game roam freely amongst 514 km2 of savannah, dry bush and ground water forest, which are also the habitat of 188 recorded species of birds. Animals to be seen are Bushbuck, Swayne’s Hartebeest, Burchell’s Zebra, Grant’s Gazelle, Guenther’s Dik-dik, Greater Kudu, Crocodile, Anubis Baboon, Grey Duiker. Birds seen include Red-billed Hornbill, Grey Hornbil,l Fish Eagle, Kori Bustard, Abyssinian Ground Hornbill. A backdrop of hills and mountains combine to make this one of the most attractive national parks in Ethiopia, and its location makes Nechisar Park very accessible. In the far eastern part of the Nechisar park is hot springs bubble to the surface.The shores and islands of Abaya and Chamo are populated by farming peoples such as the Ganjule and the Guji, both of whom also have ancient traditions of hippo hunting. The Guji ply the Lake Abaya waters in elegantly curved high-prowed ambatch boats similar to those depicted on the tombs of Egyptian phar-aohs. Made of extremely light wood, an ambatch is capable of transporting several cattle at one time and is sufficiently sturdy to withstand any attack by crocodiles, which are present in large numbers – and large sizes – on both lakes.

The vivid contrasts of the Nechisar National Park will linger long in your memory – a swathe of white grass against the backdrop of clearly defined, deeply cut hills and mountains. From the escarpment on which Arba Minch stands you look down on the clear blue waters of Lake Chamo and the sandy beaches of its northern shores, covered by crocodiles lounging in the sun.

To the north of Nechisar National Park, Lake Abaya’s surface is a startling contrast of dark red, caused by the suspended load of ferrous hydroxide in its waters. At the base of the escarpment is a large area of groundwater forest around the Kulfo River, as well as the ‘forty springs’ after which Arba Minch is named. The western edge of the Rift Valley forms an impressive backdrop to the west. Within the forest are shy, chestnut-red bushbuck, the comical bushpig, troops of Anubis baboons, and vervet monkeys.

The most commonly seen creatures of Nechisar’s bush and savannah are two extremes of antelope: the large greater kudu, with its spectacular spiral horns and white-striped flanks, and the minuscule Guenther’s dik-dik.

At first sight the Nechisar plains, which you encounter as you leave the peninsula between the two lakes, seem surprisingly empty. But dotting this apparently endless sweep of golden white grass are herds of Burchell’s zebra, which mingle with Grant’s gazelle and an occasional Swayne’s hartebeest, an endemic subspecies. Also seen are black-backed jackal and African hunting dog.

The many and varied bird species reflect the different habitats within the Nechisar park. As well as their crocodiles and bird life, lakes Abaya and Chamo are famous for their sport fishing potential, especially for Nile perch – often weighing more than 100 kilos (220 pounds) – and for the fighting ‘tiger fish’.