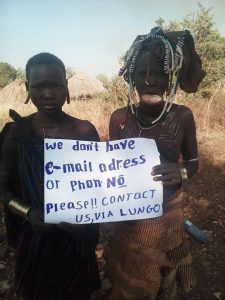 Pertaining to the Nilo-Saharan linguistic group (subgroup East-Sudanic), the Mursi are pastoralists and cultivators. The large Surma group consists of the Mursi (about 4,000 individuals), the Chai (about 11,000 individuals) and the Tirma (about 9,000 individuals), who are strongly related to the Meen (Bodi) and Murle, as well as a very little known group, the Bale. In the 1960s, an outbreak of anthrax destroyed a large part of the livestock of the Surmic groups. They have since pursued agriculture, although their culture is still connected to the keeping of livestock.

Mursi people moved east from the original Surmic nucleus and occupied the land between the Omo River and its tributary, the Mago River. The conflicts they have with the Meen (Bodi) people in the north, and the Nyangatom in the south, have resulted in violent confrontations in the last decade, aggravated by the use of automatic weapons. These armed conflicts have been responsible for a decrease in their population.

Though they are dedicated to grazing livestock, Mursi people have had to supplement food sources by cultivating sorghum and corn, and keeping bees. Hunting was once an important resource as the Mursi, along with the Kwegu, were the suppliers of wild animal skins for other groups. But this ceased when the region around the Mago River was declared a national park and wildlife reserve. The Kwegu also belong to the Surmic family and have a friendly relationship with their neighbours, the Mursi (north) and the Karo (south). The two dominant groups use Kwegu boatmen because they are experts in crossing the dangerous Omo River with livestock. They are also superior hunters.

Generally, all the Surmic groups have a decentralized clan structure which regulates conjugal unions. It is based on the age-system and has an egalitarian political structure. There are no “chiefs.” The eldest age-group holds the power and there are only leaders of rituals. The Mursi are divided into five segments, or horizontal territorial sections, between the Omo and the Mago Rivers. One sits below the other in such a way that each segment has three natural environments from which comprise their territorial segment.

The distinctive trait of the Mursi, shared by other Surmic groups, is the labial and lobular plates worn by the women. A small incision is made in the lower lip and ear lobes of a young Mursi girl during initiation rituals. A small wooden or ceramic disc is inserted into the incision and gradually replaced by larger ones until the full sized disc can be worn. Not all of the women have the labial or lobular discs.

It was said that this practice was first carried out to make them look ugly when Arab merchants continually raided their villages in search of slaves. That explanation has been rejected as studies reveal that the plates are a symbol or expression of social status. The women remove their plates on certain occasions but never when Mursi men are around. The plates are made from mud (reddish or black) or wood. There are different sizes and shapes (circular and trapezoidal), and they may be decorated with cuts or incisions on the wood or mud. Sometimes the centre is hollow, forming a large labial ring.

The men display their bodies, naked except for the panting of part or all of the skin white. Living in hostile areas and being pressured by neighboring groups, these men proudly show off their scars as proof of their courage, strength, and aggressiveness. From a young age, these values are instilled in them. Once of their most significant ceremonies (tagine or sagine) is a duel between single young men from different territories. At a certain age, they must face each other with long wooden clubs (donga) whose ends have a phallic form. During the fight, they protect their most vulnerable parts with coarse cotton cloths. The ceremony takes place every year after the harvests (November-January). All the Surmic groups participate in this ritual as another step up the social ladder for their young men. The fight is symbolic; the adversary is killed, there are serious reprisals for the young man and his family.

Simply participating in the fight, win or lose, is enough for the young man to receive recognition for his bravery and to prove he is prepared for marriage. The fights are a way to publicly display one’s personal qualities, and an attempt to conform to the tenets expected of Surma age-group behavior. They also promote a sense of community among Surma people from different geographical locations.