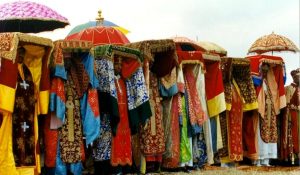 Step back in time and explore thousands of years of history, legend and lore as you take this trip to the Historic Route of Ethiopia to witness one of the most colorful and ancient festivals celebrated around the rock-hewn churches of Lalibela.

This is one of the greatest and most colorful festival  on the Ethiopian calendar. At St. Lalibela, it is celebrated with greater devotion, chanting, dancing, and singing around the rock-hewn churches  of Lalibela which were built more than 800 years ago. The ancient city of  St. Lalibela will be filled with tens of thousands of pilgrims who come  from all directions of Ethiopia and from all walks of life. Most of the pilgrims reach at St. Lalibela from far off hamlets and inaccessible valleys, walking on their bare foot for days, weeks, and even for months to share the blessing on Christmas day. Even if  Ethiopian Christmas is on January 7, there will be different ceremonies to be held around the rock-hewn churches starting the night of 4th January.  This is an ancient Christian tradition which has remained unchanged and witnessing this event, you feel like you are transported centuries and centuries back in time. You can’t help but feel that a scene the same to these one has been enacted here in the same manner centuries over centuries.

Discover the world of the ancient Ethiopians as you visit the unmatched sites of the Historic Route of Ethiopia – Axum, Lalibela, Gondar, island monasteries of Lake Tana, the palace of queen of Sheba and the last resting place of the Ark of the Covenant the least is endless. Cruise along Lake Tana, the source of the Great  Blue Nile River, trek along the spectacular Simien Mountains “the chase pieces  of gods”  with the Bleeding Heart Baboon.

Genna: An Ethiopian Christmas in January!

No. It’s not a mere spillover from the yuletide festivities that characterizes December, or a figurative expression of some random joyous occasion merely evoking the merry feeling of Christmas. It is very much the celebration of the real thing, as much as December 25 celebration is. Genna or Ethiopian Christmas takes place in the month of January in Ethiopia.

According to the ancient Julian calendar which is used in Ethiopia, Christmas day falls on January 7 on the popular Gregorian calendar most of us are familiar with. The word genna is derived from Gennana which means imminent and is a reference to the coming of the Lord Jesus and the freeing of mankind from sin.

Late in the afternoon on Genna day, a traditional hockey-like game called Yágenna Chewata often shortened to Genna is played with much enthusiasm among the youths with the elders acting as referees. It is claimed that when the shepherd heard about the birth of Christ, they were joyful and so ecstatic, they started playing the game with their sticks and staffs.

Another sport engaged in during genna is Yeferas suk which involves men on horseback throwing lances at each other. Hmmm…sound like dangerous fun!

The day before Genna (January 6) is usually a day of fasting for the people. However, for the priests and clergy the fast usually starts about 40 days earlier. Early morning on Genna, a traditional garment called shamma, a white thin toga-like cotton cloth is worn by the people and they go for mass which is held as early as 04:00hrs.

The service often lasts three hours with everyone standing through it, clergy and laity! Afterwards, they return to their homes to break the fast, feasting on the popular doro wat and injera, accompanied with tej, a local wine made from honey.

Christmas is more reflective in Ethiopia with gift exchange playing a minor role in the celebrations, and it is often amongst family and close friends. However, the children can always expect gifts of new clothes and outfits. Father Christmas is known as Yágena Abãt in Amharic.

Genna is a precursor to the Timkat festival which takes place twelve days later. Guess it’s not too late to say, “MERRY CHRISTMAS!”