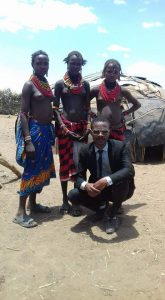 The Dasenech, alternatively known as the Geleb or Galeba, Marille and Reshiat, live just north of Lake Turkana, the region where Ethiopia borders Kenya and Sudan. These names all concern the same people, in total 24.000 souls. The Dasenech are neighbored by Turkana and Bume and are Ethiopia’s most southern people.

The Oro historically probably have had the dominating language and are solely responsible for the Kushite language now spoken by all Dasenech. The river people Ri’ele seem to have Borena background but have been Dasenech as time went by. The Randal are connected historically with the Rendille of Northern Kenya, whereas the Koro are related to the Maasai of Lake Turkana’s west coast. Having contemplated this information it will not be hard to understand that the Dasenech aren’t a united people, but more like a cluster of small groups with shared language, land, and rituals.

All clans have a more or less defined territory, except for the Koro and Oro, who are semi-nomadic. The Inkabelo are the wealthiest Dasenech and occupy the best land (Oro and Koro actually travel around in Inkabelo land). One other thing worth mentioning is that all Dasenech seem to have natural antipathy against fish. Eating fish is really a last resort in times of crises. The most important ritual of the Dasenech is the so-called dime. Taking part in the dime ritual are those men who have daughters that have already reached puberty. After the ceremony, which takes six weeks, the participants are upgraded to ‘great men’, or those that may engage in politics.

The dime ritual is directly connected to the upcoming marriage of the daughters and consists for the larger part of slaughtering large quantities of cattle (per participant: 10 cows, 30 sheep and/or goats). By the end of the ceremony the participants are extremely well-dressed, with ostrich feathers in their clay hair, oxtails around their arms, leopard skin over their shoulders, as well as the same skirt they wore during their circumcision many years earlier. In their hands they will carry wooden shields and a stick with a fallus symbol.

The nomadic roots of the Dasenech are most clearly seen today in their traditional villages, comprised as they are of small, flimsy, domed huts strongly reminiscent of the impermanent structures built by other African desert pastoralists, from the Tuareg of the Sahara to the Nama of the Kalahari. One such village lies on the west bank of the Omo, practically opposite Omorate, and can be reached by utilizing the flat-bottomed boat that serves as a ferry across the river (police escort mandatory) Another similar village lies about 20 minutes’ walk south of the town center on the east bank of the river.