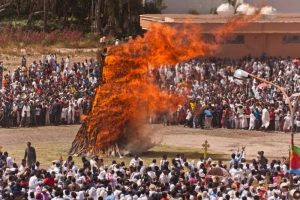 This festival tour is designed around the Classic Historic Route of Ethiopia with Meskel Festival Celebration at St. Lalibela. Meskel is being celebrated in Ethiopia for more than 1600 years. This is one of the most colorful festivals on the Ethiopian Calendar. Meskel always have been celebrated in a beautiful weather at the end of the rainy season, with a lot of dancing, feasting and lighting a massive bonfire to commemorate the discovery of the true cross on which Jesus Christ has been crucified.

The Meskel Festival tour with the Historic Route of Ethiopia provides the traveller with a practical image of the ancient historical mysteries and living historical facts and monuments of Ethiopia including the amazing rock-hewn churches of Lalibela, Simien Mountains, the fairy-tale castles of Gonder, the source of Blue Nile, the Blue Nile Falls, the island monasteries of Lake Tana, National Museum with Lucy, last but not least the charming and friendly people of Ethiopia.

Join us on this unique journey of discovery as we witness undiluted ancient African culture and civilization to the land where all begun.

All About The Meskel Festival

Religious beliefs has been a vital aspect of human existence. Man has always been in search for purpose and meaning, and thus, has birthed many different religions with their unique way of festival celebrations.

For Christians all over the world, the Easter and Christmas festivals are rooted deeply in the annals of Christianity as events that shaped the destiny of man.

For Christians in Ethiopia, the Meskel festival comes a close third to these Ethiopian festivals unique to the Christian faith. From the ancient city of Addis Ababa, Ethiopia, this timeless festival marks the discovery of the True Cross of Jesus Christ.

Christian faithfuls and tourists converge at the capital on the 27th of September every year or 28th in a leap year to commemorate the celebration of the Meskel festival.

What Is It About?

The Meskel festival is an annual Christian national holiday celebrated by the orthodox churches in Ethiopia. This festival marks the discovery of the True Cross that Jesus was crucified on.

The word “meskel” is from the Ge’ez language that translates to “cross.” So, the festival is basically a celebration of the cross. The festival is held at the iconic Meskel square in Addis Ababa and draws out a large number of religious and civil leaders as well as public figures and Christian faithfuls.

The discovery of this revered relic within Christianity can be traced back to the fourth (4th) century when the mother of the Roman Emperor Constantine, Queen Helena received divine guidance to its location.

According to legend, Queen Helena, now canonized, had a dream. In the dream,  she was told to make a bonfire from which the smoke would show her the location where the True Cross of Jesus was buried.

After doing as she was instructed and the bonfire lit, the smoke rose high up to the sky and returned to the ground, exactly where the Cross had been buried. Thus began the yearly celebration of the discovery.

The Meskel festival celebration begins with the burning of a large bonfire called Demera, by a large procession of Christians at the Meskel square – named in honor of the festival. This Demera-procession often begins at the eve of the event or sometimes the morning of the celebration.

In the capital city of Addis Ababa, a large firewood is decorated with the Meskel flower and then set on fire in line with the history surrounding the festival.

The Meskel flowers are yellow daisies which coincidentally blooms at the time of the celebration. These daisies are usually tied to the top of branches and bundled together into the demera, which is then set ablaze by the procession of people on the eve of the festival.

The crowd encircles the bonfire singing special Meskel songs while allowing it to burn completely into ash.

The Meskel Festival usually starts in the afternoon and ends after sunset amidst much merriment and prayers.

Symbolism Of The Festival

Why celebrate this discovery? One might ask. The Meskel festival symbolizes, amongst other things, the liberation of man from sin and his entry into a relationship with God following the death of Jesus. Christian faithfuls believe the death and resurrection of Jesus form the cardinal points of their belief and thus, the discovery of the cross serves to reaffirm and strengthen their faith in their religion.

The ash which was burnt completely the day before the event is used to mark a sign of the cross on the foreheads of the believers gathered to witness the event. These markings which are synonymous to the Ash Wednesday celebration, is believed to represent a mark that signifies the cancellation and forgiveness of sins following the death of Jesus on the Cross.

Other Provinces And The Meskel Festival

The celebration is not restricted to only the capital city as it is a national event. Different tribes, provinces and cities celebrate in smaller scale across the country. There is reportedly a high rate of travel amongst most people living in different parts of Ethiopia to their hometown to celebrate the event with their families.

These smaller scale celebrations are held by lighting smaller fires on streets outside their homes, a miniature version of the one lit in the capital. Later on, they gather to enjoy wine made from honey and the traditional meal of raw minced meat in flat, dry bread. For the people of Ethiopia, Christmas came early.

Why Is It A Must See?

The Meskel festival is a must see as it does not only display the rich Christian heritage of Ethiopia but also displays the beauty of the Ethiopian orthodox churches with its colorful way of worship. There is a display of church leaders adorned with attractive robes and giant crosses to symbolize the event.

The Meskel festival is a heritage of pride. It is an avenue to display the rich Christian culture of Ethiopia to foreign visitors and the world.

Christian tourists, in addition to celebrating and reaffirming their faith in Christianity, are also provided an opportunity to explore the cities of Ethiopia, which not surprisingly also has biblical references in the Old Testament.

Tourists are sure to have a wonderful time at the Meskel festival which reveals a true Christian culture in the continent of Africa.