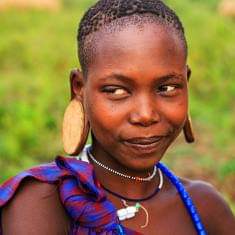 Key species: Common Eland Buffalo, Elephant, Cheetah, Lion, Giraffe, Topi, Brazza’s Monkey.and 306 species of Birds, one of which, the black-winged love bird is endemic to Ethiopia Unique physical feature: Belts of forest along the Omo and Mui rivers, hotsprings, extensive wilderness. The grass plains are relieved by bands of hills to the north and south of the centrally located park headquarters.

General Description: It is a vast expanse of true wilderness, adjacent to the Omo River, which flows southwards into Lake Turkana and is one of the richest and least-visited wildlife sanctuaries in eastern Africa. Eland, oryx, Burchell’s zebra, Lelwel hartebeest, buffalo, giraffe, elephant, waterbuck, kudu, lion, leopard and cheetah roam within the park’s boundaries. The Omo Valley is virtually free of human habitation but is rich in palaeo-anthropological remains. According to scientific research done in 1982 by the University of California at Berkeley, hominid remains from the Omo Valley probably date back more than four million years.

Omo National Park is one of the largest and biologically rich National Parks in Ethiopia which is found in Southern Nations and Nationalities of Ethiopia & located about 870 Km southwest of Addis Ababa. It is located on the west bank of the Omo River and was established as a national park in 1966. The park has approximately 2,527 square miles of vegetation and wildlife. Although an airstrip was recently built near the park headquarters on the Mui River, this park is not easily reachable; the Lonely Planet guide to Ethiopia and describes Omo National Park as “Ethiopia’s most remote park.” The lower reaches of the Omo river were declared a UNESCO World Heritage Site in 1980, after the discovery (in the Omo Kibish Formation) of the earliest known fossil fragments of Homo sapiens, which have been dated circa 195,000 years old. Major land features include the Omo River on the east, the Maji Mountains and the Sharum and Sai plains in the north and west, and the Lilibai plains and Dirga Hills to the south.

The Park is fortunate in possessing a number of rivers and streams which ultimately drains to Omo River. The name of the park derived the famous river that passes following the eastern boundary of the park called Omo River. This Park is abundant with plant species, riverbank forests, savannahs, grassy plains, mountains & valleys.  The Beautiful landscape, the three Hot springs,  which feed the Omo River. The important Mui River crosses the middle of the park. Much of the park is at c.800m but the southern part of the Neruze river drops to 450 m. The highest peak in the Maji Mountains is 1,541 m. The edges of the Omo River, which borders the park along its length to the east, are covered by close stands of tall trees including Tamarindus indica, Ficus sycamorus and F. salicifolia, Kigelia aethiopium, Phoenix reclinata, Terminalia brownii, Acacia polyacantha and others. A well-developed shrub layer combined with woody and herbaceous climbers provides dense cover along the edge of the river which, however, is frequently broken by incoming streams and the activities of the local people and animals (particularly Hippo). Away from the river edge, dense stands of Euphorbia tirucalli abound, the canopies shading standing water long after the rains have abated. The park also embraces extensive open grasslands interspersed with stands of woodland species and bush vegetation

The current bird list for the park is 325 species  and 75 species of mammals . The riverine forest along the Omo River is important for several different bird groups, including herons and egrets, kingfishers, barbets, chats and thrushes, woodpeckers, pigeons, shrikes, warblers and flycatchers. Halcyon malimbica is a recent discovery in these forests. Somali?Masai biome species include Laniarius ruficeps, Turdus tephronotus, Cisticola bodessa, Lonchura griseicapilla and Plocepasser donaldsoni. Phoeniculus damarensis, Turdoides tenebrosus and T. plebejus are also present. Palearctic species, especially waders, are fond of the hot springs at Illibai. In the dry grassland around these springs Cercopsis egregia has been recorded, one of the few places known for the species in southern Ethiopia. In addition, two species of the Sudan?Guinea Savanna biome have been recorded at this site. Eland, cheetah, elephant, giraffe, buffalo, lion, leopard, lelwel hartebeest, tiang, Oryx, Burchell’s zebra, Lesser kudu, de Brazzas monkey, common baboon and guereza, ostrich on the plains and the endemic black-winged lovebird are among others typical features of Omo National Park.