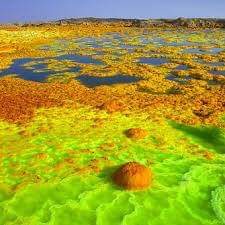 One of Africa’s most striking geographical features is a giant tear across the earth’s surface visible even from space: the Great Rift Valley. Extending from the Middle East to Mozambique, the Rift Valley passes in a north-easterly to South-westerly direction right through Ethiopia, endowing the country with some spectacular sights range from hot, dry, and barren places to a string of beautiful lakes. This tremendous collapse of the earth’s surface occurred at the same time that the Arabia Peninsula, geologically a part of Africa. The Afar Depression is a plate tectonic triple junction where the spreading ridges that are forming the Red Sea and the Gulf of Aden emerge on land and meet the East African Rift. The Afar Depression is one of two places on Earth where a mid-ocean ridge can be studied on land, the other being Iceland. At present, the Afar is slowly being pulled apart at a rate of 1-2 cm per year. The floor of the Afar Depression is composed mostly of basaltic lava. The Afar Depression and Triple Junction also mark the location of a mantle plume, a great uprising of mantle that melts to yield basalt.

This place which used to be part of the Red Sea has kilometers of salt deposits’. In some places the slat deposit’s are about 3miles (5 KMS) thick. Below a salt lake is a substantial source of volcanic heat which causes hot water to rise through layers of salt and anhydrite deposits. Minerals get dissolved and are deposited, near the springs, and form shapes very much reminiscent (but smaller than) hornitos on basaltic lava flows. Sulphur, other minerals and possibly Thermopylae bacteria cause spectacular colors, Sundered from the rest of the continent. In Eastern Ethiopia, near the southern end of the Red Sea, an immense, more or less triangular depression descends far below sea level (at some points 120 meter below sea level). Known as the Danakil Depression, this extremely hot and dry area is actually a part of the Africa’s Great Rift Valley. In this seemingly inhospitable area there live the nomadic Afar people who number about 3 million. Their external borders are Eritrea, Djibouti, and Somalia. The region where these people live is also called Afar-one of the nine regions of Ethiopia. Its current capital is named Semera on the paved Awash – Assab highway. The Danakil, or Dallol, depression, which encompasses a good portion of the eastern part of the Tigray region, is one of the earth’s hottest and most inhospitable places, with many points more than 100 meters (328 feet) below sea level and noon-time temperatures soaring above 50 degree Celsius (122 degree Fahrenheit)

It is the site of a dry salt lake from which Ethiopians since time immemorial have obtained their amoles, or bars of salt, used both for consumption and, long ago, as a primitive sort of money. Minded by the Afar people for at least a millennium and a half, the salt is loaded on camels and taken to the highlands with long caravans, where it is still in considerable demand and fetches a good price.