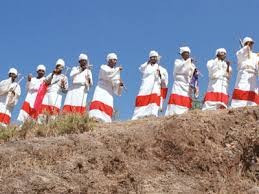 Join us on this trip of discover as we witness an ancient way celebrating Easter and explore the world of the ancient Ethiopians. Step back in time and celebrate Easter the way it has been performed centuries and centuries back. You will be amazed to witness how ancient historical traditions and unique African culture have been preserved in an incredible manner.

This tour takes you deep in to the land which used to be one of the greatest kingdoms of the world. In this fascinating land the past comes alive in the form of strange and beautiful monuments and ruins, built long centuries ago. Moreover, it is a past which began as the cradle of mankind. Marvel at the spectacular 2,000-year-old stele at Axum, the rock-hewn churches of Lalibela built more than 800 years ago, the castles of Gondar, the island monasteries of Lake Tana, the magnificent Simien Mountains, the less visited rock-hewn churches of Tigray, the Great Blue Nile Falls and last but not least the friendly and charming people.

Easter marks a very important interest and enthusiasm among the Christian community in Ethiopia being the last major religious festival.

Believers of the Ethiopian Orthodox church await its arrival with great eager passing through a long lent period of 55 days where no animal product of meat, milk or egg shall not be consumed during this period. Fasting runs from morning till 3Pm in the afternoon. Many spend most of their time at church doing prayers and performing other religious commitments.

In the remote parts of the country even couples won’t sleep together during the long lent season purifying their flesh to this fasting period where they focus and concentrate on religious matters more.

One week before Easter is called “Mamat” a time to remember the suffering, beatings, wounds and pains of Jesus. In this week, people would not laugh, kiss, joke or make any fun but try to be on strict remembrance of those troubles of the Lord.

Two days before Easter is called day of crucify and this normally falls on Friday. On this day people spend the whole time bowing down before God as much as they can bow down depending on their strength, age and health issue to clean themselves from any sin. Some do 1000 times some even more.

On the eve of Easter almost all believers shall spend the night in the church doing their last religious sacrifices. Ceremonies in the church are so colorful and bygone that one would feel to be in time past at a Jew synagogue. Priest & deacons according to their ranks with their colorful Levite looking costume will be chanting and praying all the night long. All the instruments used are very traditional ones such as the leather made drums and also the cross-shaped prayer sticks of priests.

At 3:00 AM early in the morning the whole mass will make a big announcement declaring the resurrection of Jesus and depart to their respective homes. At home people would dine the traditional hot spicy chicken by the name “Doro Wet”. Even those sleeping at home would wake up to join those from the church service to dine together.

Among the religious festivals this one is known to be important for visiting friends, relatives and families with different gifts. In general people buy goats and sheep as present to give to their relations but in the rural part of the country people go to visit their relatives with home baked bread called “Difo” and also homemade liquor called “Areke”. In cities like Addis people go to visit other people with pastry, cards and the like.

A week after Easter is also a colorful festival called “DagmeTinsae”, which marks the ascension of Jesus to heaven. This is also equally celebrated with the main Easter festival.

Eater is very much attractive to be attended in the historical church of the country but more usually spend in the rock-churches of Lalibela or the ancient & first church of St. Mary of Zion church in Axum.

The coming year, it will fall on May 1, 2018. Hope to see you in one of the historical cities for this fabulous celebration