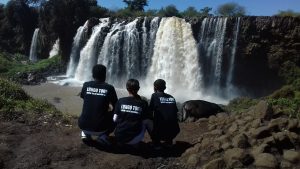 The name of this sprawling capital city means “New Flower.” Founded by Emperor Menelik II in 1887 and situated  between 2300 – 2500 meters, Addis Ababa is the third highest capital in the world. Today it’s one of African’s largest cities with a population of about 2 million and the continent’s premier diplomatic center as the headquarters for African Union located here. Impressive monuments of colonial architecture are scattered among stretches of sun-bleached shacks. Addis Ababa , besides its many attractive sites, lies at the centre of an area rich in places of interest, most of which can be visited either as a half or full day trips.

Perched at an altitude of 2,630 m, among wild craggy mountains and vast rocky escarpments, Lalibela is a strikingly singular town famed for its 12th  century rock-hewn churches. No matter if you’ve visited other rock-hewn churches in the rest of the world; nothing will prepare you for these.

At the end of the 12th  and beginning of the 13th  centuries, King Lalibela of the Zaghwe dynasty built a series of rock hewn churches, carved into the rugged mountainsides. There are 11 churches in the town named after him, with others in the surrounding countryside.

The next stop on the historic route, with its strategic hilltop location at an altitude of 2200 m in the Southern foothills of the Simien Mountains , is the graceful city of Gondar , site of numerous castle-like palaces, dating back from the seventeenth and eighteenth centuries.

The city was founded by Emperor Fasilidas in the 17th century and remained the capital of Ethiopia for the next two centuries. It’s known for its many medieval castles and the design and decoration of its churches. Among the dozen edifices found on the precinct of the royal compound the earliest of the castles was created by Fasilidas himself and is still in such an excellent state of repair that it is still possible climb its stairs all the way to the roof which commands a breathtaking view over much of the city.

Ethiopia is associated first and foremost with desert and drought – not a little ironic, when you consider that the fertile Nile basin, on which Egypt depends, receives 90% of its water from the Ethiopian highlands particularly this Blue Nile River .

Bahir Dar, set at an altitude of 1830 m, is a comfortable base for excursion by land and water to the Blue Nile waterfalls and a number of historic lake-side churches and monasteries. Blue Nile Falls locally known as ‘Tis Isat’ (the water that smokes), about 30 km after it exits Lake Tana, plunges over a 45 m high rock face to form one of Africa’s most spectacular waterfalls. Lake Tana , with the surface area of 3,673 sq km, is the largest lake in Ethiopia . Besides being the source of the Blue Nile, Lake Tana is renowned for its varied birdlife as well as housing on its islands and peninsulas more than 20 monastic churches most of which were founded in or before the 15 th century, and are still in service today.

According to the kibre- negest (Book of Kings) written in 14th century , it was the capital of the legendary queen of Sheba in the 10th century BC, it does seem certain that a high civilization was established here in Axum. Axum is renowned for its cathedral of St. Mary of Zion, where legend has it, the original Arc of covenant is housed. Axum is also famous for its 7 mysterious monolithic stelae, hewn from single pieces of solid granite. This site is registered by UNNESCO as world heritage.