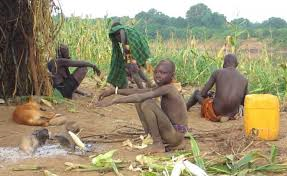 The Kwegu or Muguji are one of the smallest tribes in Omo Valley, living in small villages along the Mago River. The Kwegu speak the Kwegu language as a mother tongue, which belongs to the Nilo-Saharan language family.

Unlike the other tribes, the Kwegu do not have cattle. They are hunters and live off the land. Small games are trapped by the tribe for food, but they also eat fruits and honey if available. They are largely dependant on the Omo River for fish to eat. They spend a large part of their time on the river and are noted for their canoe-making skills. Close relatives to the Kwegu are the Karo people. It is often that you can find Kwegu and Karo people living together or even marrying each other.

The Kwegu people (or Muguji people) are hunter-gathering and agro-fishery people of Surmic ethnic extraction inhabiting the shores of the Omo River in southwestern Ethiopia. The ethnic Kwegu who are one of the smallest ethnic groups in Ethiopia with the population of about 700 and facing extinction resides predominantly Southwest, Omo River west bank, Kuchur village, and a small group in the north.
Africa | A young Kwegu man. The Kwegu (known to the Karo as Muguji – a degoratory name meaning ‘Working Ant’) are the smallest tribe living on the banks the Omo River in southwest Ethiopia. Only 500 to 600 strong, they live under the protection of the powerful Nyag’atom people who are their neighbours. During the 20th Century, they have been serfs of the Mursi, then of the Karo who mistreated them before they moved to Nyag’atom

The Kwegu are known to the Karo as Muguji. Muguji is a derogatory name meaning ‘Working Ant.’ The Kwegu live under the protection of the powerful Nyag’atom people who are their neighbours. During the 20th Century, they have been serfs of the Mursi, then of the Karo who mistreated them before they moved to Nyag’atom land

Unlike the other tribes in the Omo Valley Kwegu do not have cattle. They are primarily fishermen, hunters and cultivators, they spend a large part of their time on the river and are noted for their canoe-making skills. The speed of the river’s current and the dangers from the crocodiles render these skills vital.

The Kwegu speak the Kwegu language as a mother tongue, which belongs to the Nilo-Saharan language family. There is 36% lexical similarity with the Mursi and, depending on the area where they live, they use the Bodi dialect of Me’en or Mursi as second language.

The Kwegu live in a curious symbiotic relationship with the Mursi, which some anthropologists considers it as more of tribal dominance, in which the Mursi dominates the Kwegu. The Kwegu serve the Mursi by providing them with honey, games and use their canoes to ferry them across the Omo, for the Kwegu are expert in crossing through the swift currents of the Omo River.

In return, the Mursi benefit the Kwegu by assisting them to obtain cattle (which the Kwegu do not have) which is the vital part of bride wealth and without which they cannot get married.

Mursi men marry Kwegu women, Kwegu men are not permitted to marry Mursi women. This is because they cannot afford Mursi bride-price in cattle and also the Mursi people look down upon tribes that do not own cattle.

Most often Kwegu man acquires Mursi patron who protects him from other Mursi people covetous of Kwegu`s possessions and plots of land he may have painstakingly cleared in the bush.
The Kwegu`s favorite meat is hippopotamus and sometime elephant. For eating hippo other neighbouring tribes considers the Kwegu as unclean people.

A young Kwegu girl garlanded with wild Desert Rose flowers.Adopting the practice of Karo women and girls, many Kwegu girls pierce a hole below the lower lip in which they place a thin piece of metal or a nail for decoration.

In Kwegu courtship ritual, when a man fancies a particular girl, he will will contract a friend to approach the woman with his intentions. A protracted courtship spanning almost a year will ensue, which involves numerous conversations between the two. Any interlopers are summarily dealt with by the youth.

At some stage they will rendezvous in the bush where she will shake his hand to confirm her willingness to have sex that follows. If they woman disagree to sex the man cannot force her. Any attempt at having non-consensual sex with a woman in Kwegu society leads to the banishment of the man.