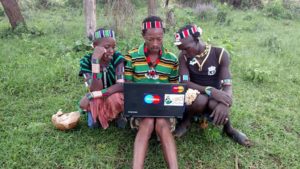 The Banna live in the Southern Omo Zone or Omo Valley, near the Kenyan border. Their name is also spelled as Benna and Bena. The most important villages for their market activities are Key-Afar and Jinka, the latter sometimes being referred to as the Paris of Ethiopia – this is however a gross exaggeration**. The southern part of the Omo Valley is known as the ‘poisoned paradise’. The landscape is beautiful but conditions are simply too hot and too dry to promote good health and longevity. Not surprisingly, people over 45 years old are a rarity in these parts. This pastural people numbers about 10,000. Unlike most other Ethiopians of the South they do not have community houses and often spend the night in the midst of their cattle. Some Banna do undertake agricultural activities, but climate and infertile land are unfavorable to this lifestyle. At the market they sell mainly butter, some vodka-like brews, and hard grains like tef.

The Banna share many traditions and rituals with surrounding peoples like the Tsamai, Aari, Hamar, and Bashada. One of these traditions is the so-called ‘jumping over the bull’. If a young man wants to marry the girl of his choice he will have to jump over bulls picked by the girl’s family. He is required to jump over them four times: two times in each direction. He is assisted by friends (called the ‘maz’); those who have successfully performed the jumping in previous years. They (try to) hold the cattle to prevent the young candidate from falling.

If the jumper fails, it is considered a bad sign and he will have another chance a year later. Not seldom will he suffer a beating by the girl’s relatives. The surrounding peoples are a bit more tolerant and will blame the wind in case of his failure, and do allow the aspiring groom a second chance. If the groom-to-be succeeds, he may keep the girl in exchange for cattle given to her family. For two months the betrothed couple will share blood and milk (blood from the cow’s neck is mixed with her milk and drunk). A wealthy, strong man may marry up to four women.