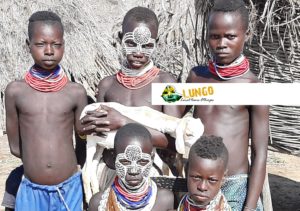 The Kara people, who speak an Omotic language, are a small group (approximately 1,000 people) occupying the left bank of the Omo River. They are closely related to the Benna-Bashada-Hamar group and the Dassanetch-Arbore.

According to their oral tradition, the Karo believe their roots are as herdsmen who emigrated to the mountains of the Hamar and Banna peoples. They lived there for some time until one day their livestock disappeared in search of water. The livestock eventually returned, but when they disappeared again, the Karo followed them. This is how they discovered the existence of the Omo River and came to settle on its banks. However, the tsetse fly wiped out their herds and they ended up dedicating themselves to agriculture in order to survive (Sorghum, Corn, and beans).

The Kara established symbiotic agro-livestock relations with their neighbors the Hamar-Benna-Bashada and the Dassanetch. Nowadays supplement their survival economy with beekeeping and fishing, which was taboo until necessity drove them into it recently. Only single young men are allowed to fish, but they must complete a purification ritual immediately afterward. A similar adaption occurred with hunting. Necessity was joined by the social prestige acquired by killing a dangerous animal. Hunting is presently controlled by official groups which aim to preserve the fauna of the region.

A part of the Karo’s small accumulation of livestock (goats and sheep) is looked after by the Hamar. In return, the Hamar receive sorghum from the Karo. This is all connected by a series of links and alliances between both groups, and the belief that they all share a common genealogy.

Kara people believe that the Dassanetch and Arbore are of the same family. Therefore any conflict between them is taboo. The Karo and Bashada people manufacture earthenware pots that are used in commercial transactions with other groups, especially with the Dassanetch, who provide sorghum when their harvests have not been sufficient.

While the Kara maintain friendly relationships with these groups, they have quite a different approach to their neighbors, the Nyangatom and Mursi. These relationships have given rise to occasional but bloody conflicts. The year 1993 saw the most recent conflict-a disagreement over ownership of arable land on the eastern side of the Omo River.

However, according to some Kara, the conflicts with the Mursi occur because of the desire certain Karo have for guns and prestigious scarification (for successfully killing a person). They wish to demonstrate their value as warriors.

The two most important Kara villages are Dous and Korcho. In the villages, people reside in conical huts (ono). These homes are renovated about twice a year due to destruction by termites. In front of these huts, there is a flat building where the family sleeps during the dry season. On visiting a village, you notice a kind of “door” in front of the hut and other places, which is made of two posts in a Y shape. Atop the posts are horizontal wood bars from which hang a series of objects such as buffalo tails, ears, and hooves. This is the mulda, a symbolic framework entrance to the house. There are family and clan muldas. At the end of each village, there is a marmar, a sacred place where only married people may go and where the most important rituals are carried out.

The most important ceremony in the life of a Kara is the pilla, or jumping over a group of Oxen. This ritual marks the passage from adolescence to adulthood. The ceremony is similar to that of the Hamar, however the Karo only have four chances to hump over the oxen without falling. If the community cannot come up with a suitable herd, they borrow one from the Hamar or buy it from the Dassanetch. After the pilla, the young male may marry. The dowry is fixed at 127 goats and is generally made up in the years after the marriage. Similar to other groups of the region, sexual relations between young, single people are open but produce serious social problems if any children result from these relationships. Such children are considered bad luck (mingi) are abandoned.

The same happens to any child who is born with a deformity of does not attain predetermined expectations such as the growth of the upper teeth before the lower ones. Accidents which damage the penis at a young age or in the case of girls, damage the breast, are also considered bad luck and may result in abandonment of the child. This belief is especially prevalent throughout the Hamar-Banna, Arbore, and Tsamako. Efforts made by the government to eradicate abandonment have faced strong opposition. The group believe that the mingi  disgrace the family and group.

The most striking thing about Kara people’s symbolic and ornamental expressions is the painted body and face decorations. This is an elaborate process which ranges from fine and elaborate details to rough, but striking paintings traced with the palms or fingers. The most beautiful expression is in the facial and chest paintings that combine white (chalk), black (coal), yellow, ochre, and red (minerals).

The Nilotic Kwegu lives among the Omotic Karo. Kwegu people are superiour hunters as well as courageous and skillful navigators of the dangerous Omo River. A part of the Kwegu known as the Muguji appears the original population before the arrival of the Karo.

The Kara Tribe: A Rich Canvas of Tradition

The Kara tribe residing along the borders of the Lower Omo River incorporates rich, cultural symbolism into their rituals by using ornate body art, intricate headdresses, and body scarification to express beauty and significance within their community. This lively tribe, numbering under 1000, is the main sedentary agriculturalist group in the Lower Omo Valley area of southern Ethiopia. Their environment, though limited both in advanced materials and natural resources, does not preclude their desire for unique self-disclosure, both aesthetically and symbolically.

Many of their traditional rituals might have originated with another neighboring tribe, the Hamar, which is of the same lineage but numbers approximately 30,000. These two groups speak nearly identical, Omotic languages and much of the symbolism found in both groups’ ceremonies suggest a rich, cultural history together. The Karo people differentiate themselves from many of the neighboring tribes by excelling specifically in body and face painting. They paint themselves daily with colored ochre, white chalk, yellow mineral rock, charcoal, and pulverized iron ore, all natural resources local to the area. The specific designs drawn on their bodies can change daily and vary in content, ranging from simple stars or lines to animal motifs, such as guinea fowl plumage, or to the most popular – a myriad of handprints covering the torso and legs. The painted human body is then augmented into a living, aesthetically pleasing, communicative art form, full of cultural meaning and jubilant expressionism.

Both the Kara and the Hamar men use clay to construct elaborate hairstyles and headdresses for themselves, signifying status, beauty, and bravery. One decorative headpiece in particular holds an analogous symbolic representation for both tribes. A man wearing a grey and red-ochre clay hair bun with an Ostrich feather indicates that he has bravely killed an enemy from another tribe or a dangerous animal, such as a lion or a leopard. This clay hair bun often takes up to three days to construct. It is usually remade every three to six months, and can be worn for a period of up to one year after the kill. Large beads worn around the neck of a man also signify a big game kill.

Body scarification conveys either significant symbolism or aesthetic beauty, depending upon the sex of the individual. The scarification of the man’s chest indicates that he has killed enemies from other tribes, and he is highly respected within his community. Each line on his chest represents one killing, and complete chest scarification is not rare. The Karo women are considered particularly sensual and attractive if cuts are made deep into their chests and torsos and ash is rubbed in, creating a raised effect over time and thereby enhancing sexual beauty.

Tribal communities employ artistic practices into their daily lives for self-pleasure and pride, respect and symbolic recognition within their society, and as a means of attracting the opposite sex during rituals. Courtship dances are frequently held and oftentimes the outcome of these frenzied, impassioned dances result in future marriages. Specific rituals occur regularly within the tribal communities, and sometimes neighboring villagers will travel all night to witness these rites of passages and participate in the celebrations.

The Kara and the Hamar frequently perform the Bula or Pilla initiation rite, which signifies the coming of age for young men. The initiate must demonstrate that he is ready to “become a man” by leaping over rows of cattle six times consecutively without falling. If successful, the boy will become eligible for marriage (as long as his older brothers are already married) and he will be allowed to appear publicly with the elders in sacred areas.

The small Karo tribe’s existence is somewhat precarious. They are acutely aware of imposing governmental agencies, officials, and the powers-that-be which could impinge upon their survival once technological and civilized growth grabs hold of this otherwise remote and forgotten territory. The inevitability of the encroaching populace and the introduction of modern weaponry has affected their already delicate ecosystem, specifically through land degradations and widespread wildlife poaching. Being the smallest tribe in the area, this group obviously struggles with direct threats from nearby tribes that have more gun power, greater numbers, and likely coalitions with one another. The Karo have recently attempted making peace with these larger groups, recognizing that if they are to survive as a unique culture, they must maintain a peaceful coexistence with their neighbors.

When looked at within the context of a whole culture, the Karo’s primitive yet elegant lifestyle should provide us all with perspective and a clearer outlook on our own daily rituals, and what they mean to us, if anything. Every primitive culture not lost to the modern world or its influences, possesses remarkable qualities unique unto itself, and it is within that uniqueness that the civilized world can become enriched.