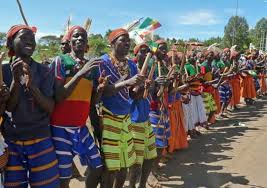 The 350,000 members of the Konso nation live in Central Ethiopia, south of Lake Chamo in the Rift Valley. Their ‘capital’ is Konso city, also known as Bakuele.

They are farmers, living in fortified villages surrounded by their farming land. Although not really under direct threat in the past, safety comes first, so the Konso developed a defensive style of building, with villages on hilltops, protected by fortifications around them. One enters through a gate and then finds one self in a labyrinth of narrow curvy alleys, little squares, and small flower gardens with high fences. Often they grow their crops (sunflowers, fruits, grains, cotton, sorghum, and corn) on terraces, thus using every bit of land possible. They are also renowned bee-keepers; the bees produce acacia honey, which is also exported to Europe. The Konso are a resourceful, efficient, charming, careful, and hard-working people and it is ironic that they suffered severe losses in the days of famine in the 1990s.

Their societal structure is clan-based; the whole person consists of nine clans (gada) with an average size of 7,000 members. The clans’ organization is based on exogamy and patrilinearity. The clan leader wears the title pokwalla.

They are famous for their wooden anthropomorph statuettes, erected in honor of important – deceased – people. In the Konso language these statuettes are called Waga. The Wagas are always placed in groups, with the main figure in the center, surrounded by people and animals that were important to him during his lifetime. Another exclusive art form is the use of the kalasha: large fallus symbols in wood (or nowadays aluminium), which are worn on the forehead during special events. It is only logical that one also finds wagas with kalasha. Most common sculpting material is gayo wood. The Konso’s neighbors, the Gato tribe, has the same traditions and are often seen as a Konso tribe, which is why they are called the Konso-Gato.

Konso: A Culture of Rock and Stone villages

Perched on a narrow range of highland mountains ranging from 5,000 to 6,000 feet, live a group of people called Konso. Their homeland, located south of the town of Arba Minch, is surrounded by the lands of the Borana, Burji and Gaudwada peoples. While they have common origins with these tribes and to the Oromo people in general, the Konso’s culture has evolved in a high degree of isolation that is especially apparent in the outward appearance of their villages and fields.

When approaching the Konso homeland, a visitor first notices the red soil, which is littered with rocks, mainly basalt. The rocks form the foundation of both their villages and farmland. Rock walls surround their densely populated villages, often 10-15 feet high and 7-8 feet thick. Inside is a maze of narrow trails, built up with stones, winding through small individual compounds on either side.

Each married man has his own compound comprised of at least three huts. The area is divided into an upper level where the family lives and the lower level where the livestock are kept. The stone walls of the huts are topped by thatched beehive-shaped roofs. Entry into the sleeping huts is through a low arched doorway, about 3 feet high, which gives way to a short wooden tunnel. The point of this restricted entry is for defense: an enemy crawling through would not be able to use his weapon and the occupants could easily club or spear him. The compound is secured by a high fence of wooden palings which are sometimes reinforced by planting small trees. The trees, rocks and wood pilings create an impression of walking through a buttressed shady grove.

The narrow lanes converge on open places called moras, which are encircled by trees growing on low stone platforms. A large village will have several moras. These seem to be the center of village life, at least for the men: dances, assemblies, religious ceremonies and courts of law are held there. Women are excluded from the most important rites although they may attend others as spectators and may take part in dances.

Adjoining the open areas are striking buildings (also called moras) with open-sided walls and steep, thatched roofs supported by juniper trunks. Groups of men and older boys are required to sleep there so they will be ready for fires (a major threat) or enemy attacks (very unlikely today). There is a third reason men sleep there: They believe women weaken them, draining their vitality by sexual intercourse, so they sometimes spend the night in the special houses to preserve their virility.

One is impressed by the cleanliness walking through a Konso village. Latrines are on the outskirts of the towns and animal dung is removed to fertilize the fields. Work parties repair the narrow walkways and remove trash and weeds from the common areas in the village. (This is at least true in villages open to tourists. In others, the care of public places may not always be enforced.)

Konso: A Culture of Rock and Stone Fields

The Konso villages are a flowing composition of rock walls and wood. In contrast, the fields are stepping stones of rock walls and red soil climbing the steep hillsides. The terraces, with walls up to five feet high and twice as thick at the base, serve two purposes. They catch the rain that comes only twice a year, during the big rains around February and the small rains in the beginning of October. The rain can, however, be delivered in torrential downpours, so the terracing also keeps the soil and the crops from washing away. The rain is so critical to their very existence that when it rains they solemnly announce, “God is raining.”

Although the soil is rocky and infertile, the Konso enrich it with both animal and human waste, which is diligently collected and dried before being tilled into the soil. The principal crop is millet, of which many different varieties are grown. Other crops, some introduced, include maize, beans, wheat and yams. Cash crops are coffee and cotton. Their “drought” food is a tuber that can survive with little moisture. It is dried and pounded into flour and then mixed with millet or other grains for food and beer.

The fields are owned individually; both the men and women in the family work together to prepare the soil and to plant, weed and harvest the crops. When the crops begin to mature, the young men and women guard the fields during the day agains the onslaught of birds, using slingshots to hurl stones at them and their voices to hurl nasty words. At night the older men sleep in the fields in temporary shelters, banging on pots and yelling at intervals to drive off creatures that could ravage a crop in a few nights.

Most families own some cows, sheep and goats, which are corralled in their compound to make it easier to collect the manure for the fields. In the mornings, they are herded to the village gates where boys are assigned to lead them to the grazing lands for the day. The Konso, at least at one time, were not big meat eaters because the animals were too valuable for their manure and for milk used to make butter, a prized delicacy.

Honey is also considered a great delicacy and the cylindrical bee hives adorn the branches of many trees. The bees are affectionately called “warriors of God.” Of course, the Konso assert that theirs is the best honey in Ethiopia, a distinction shared by every honey producing community in the country! Making a living in this rocky, steep land is difficult, to say the least, but the Konso have almost made an industry of hard work that is evident in the success of their farming. This industriousness has earned the Konso the reputation of being the hardest workers in Ethiopia. But it is added, with a certain amount of admiration and disbelief, that “they actually enjoy hard work!”