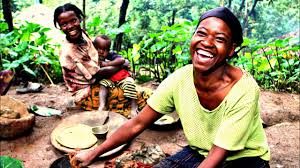 The Ari people inhabit the northern part of the Mago National Park in Ethiopia and have the largest territory of all the tribes in the area. They have fertile lands allowing them to have several types of plantations. An Ari’s crop can consist of grains, coffee, fruits and honey. It’s also common for them to have large herds of livestock.

Their women are known for selling pottery and wearing skirts made from false banana trees called enset. Tribe members wear a lot of jewellery and have many piercings in their ears. They wrap beads and bracelets around their arms and waist for decoration.

The Ari are known to paint and scar their bodies as part of their culture. You can find some of the Ari people visiting the market in Key Afer. Jinka is their capital town.