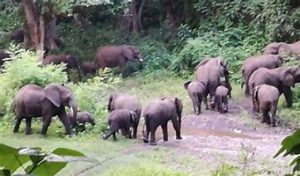 Chebera Churchura National Park (CCNP) is located on the western side of the central Omo-Gibe basin, in between Dawro zone and Konta Special Woreda of the Southern Nations, Nationalities and Peoples Regional State of Ethiopia.  The Omo River provides the boundary between the south and the West. The natural vegetation of the park is diverse. There are montane forests in the eastern and northwestern highlands, riparian forests along the rivers, and woodland vegetation is found in the southern part of the Park. Grass- and scrubland cover the largest part of the Park. The altitude of the park ranges from 550-1700 m.a.s.l. and the highest peak is the Mecha hill on the western boundary The climate of the park is relatively hot, but mostly quite pleasant, also due to the shade the forest provides. The rainy season is from April and August. The average annual rainfall is relatively high: it varies from 1000 to 3500 mm. This gives the park a green and lush appearance all year around.

The park is located about 330 km west of Hawassa, the capital of the Regional State. There is a good gravel road from Sodo to the park. The park can be reached easily from Jimma as well along with a gravel road straight south of around 110 km length. The Park is fortunate in possessing numerous rivers and streams and some small crater lakes (Keriballa, Shasho, Koka), which are one reason for the rich wildlife of the area. The Zigina River rises from the northeast highlands of the area and cross the central part of the park (north to south) and feeds the Omo River. There are also different perennial rivers crossing the park feeding the Omo River. The Shoshuma River is the main river of the park. It rises from the northwestern highlands of the Konta area, flows across the northeastern part of the park and joins with Zigina River inside the park, finally draining into the Omo River.

The Chebera Churchura National Park is located in the western part of Ethiopia in the Omo region covering over 1215 square kilometers. The Park is the best place to view elephants and this is because the park has a large number of elephants that habitate in it. The park is filled with savannah grasslands and woodland where many of the wild animals that are found in the park habitate. It is also a home to many bird species which amount to a recorded number of 237 species, it is filled with Rivers that flow within and a unique landscape that allows tourists to hike through the park.

Compared to other parks in Ethiopia, the Chebera Churchura National Park had been discovered of recent and that is why when you get to the place you will be able to experience the real wilderness of Ethiopia since the forest has been untouched and the animals have a free reign when it comes to the roaming around.

Besides animal viewing and the normal things that people often think about when it comes to National parks, there are different things that will and can make your trip to the churchura Park memorable and some of these include the following:

The Rivers in the Park

The Shoshuma River starts from the Northern part of the Park and crosses to the Eastern Part where it meets with the Zigina River before flowing out into the Omo River which is located in the Omo River.

The Zigina River also crosses the Park from the North eastern part, crosses through the central are where it is joined by the Shoshuma River before they both flow into the Omo River.

There are other Omo River tributaries that flow through the Park and some of crater Lakes which include the Shasho Crater Lake, the Keriballa Crater Lake and the Koka Crater Lake and their presence in the Park has increased the number off the wild life that is found in the area. There are also gorges, the Meka forest, two beautiful hot and cold springs and not forgetting the beautiful landscape which will blow your mind away for as long as you visit the Park when you are in Ethiopia.

The hot and cold springs in the Park

As you trek through the National Park, one of the trek trails will take you through the Park till you meet the cold and hot springs. You can easily rest here as you marvel at the springs and if you have an egg, you can actually boil it in the hot springs and refresh from the cold ones. It has a magnificent view and while here you will be able to spot a few bird species and animals especially monkeys jumping from one tree to the next. The springs also provide a good backdrop for all those who love taking photographs.

The Meka forest that is located within the churchura National park and it is the perfect place for all that want to see the African elephants. The largest population of the African elephants that have been recorded in the Park are found here and there are clear spots from where you can view and study their behavior. It is also a field trip for botanists due to the presence of numerous tree species some of which are endemic to Ethiopia.

The only way you will be able to view the elephants is by going with a licensed tour guide with a gun who will help with the provision of protection from the wild animals and any other attacks and also with translation because many locals hardly speak any English and communication might be hard if you do not go with a tour guide.

Birding in the Churchura National Park

Birding is one of the activities that tourists carry put when they visit the Chebera Churchura National Park due to the many bird species that are found in the area. Some birds can be seen in the forests whereas others can be seen lounging on the different River Banks. Some of the bird species that can be seen in the Park include the double toothed barbet, the silvery cheeked hornbill, the white cheeked Turaco and the half collared kingfisher, the Wattled Ibis, the black headed forest Oriole, the white winged cliff chat, the thick billed Raven, the banded among the other plenty species in the Park. The best time for one to go for birding in the Chebera Churchura National Park is during the rainy season because during this time, many birds can be seen on the banks of the different Rivers that flow through the Park and you will also get a chance to see some migratory birds as well.

There are numerous animals that habitate in the Churchura National Park and some of these include elephants, buffalos, antelopes, crocodiles, many aqua life, lions, hippos, the wild boar, different types of monkeys some of which include the Vervet monkeys, baboons, the porcupine which belongs to the rodent family, the Desert Warthog and leopards and many more other animals that have not been mentioned. The best time for one to visit the park for wild life viewing is always during the dry season because during this time animals can be seen in the different parts of the park moving around in search of food and water.

The best time to go for trekking in the Park is during the dry season after the heavy rains because during this time the walking trails will easily be accessible without floods and mud which make hiking hard. And remember that you will also not be allowed to go for trekking in the Park if you do not have a trained and licensed tour guide with you. Therefore before you head out, make sure that you have one and a permit granting you access to the trekking trails within the National Park.

Visiting the locals in the area

Once you are done with exploring the Chebera Churchura Park, you can venture out into the nearby villages and get to know more about the locals that live there. The locals are always welcoming to visitors and you get to meet them and enjoy their unique cultural practices that separates them from the rest of the locals in Ethiopia.

The most unique thing about these locals is that they love the greenery that is provided by the trees in the National Park and that is why they are doing all that it takes in order to be able to conserve the forest because they also use it when it comes to grazing of their animals.

When to visit the Churchura National park

The Chebera Churchura National Park is also a good get away for most tourists because unlike other National Parks in the country, it is one of the few that has kept its natural beauty because the locals have hardly encroached on the beautiful forest hence you get to see the tur wilderness of Ethiopia all wrapped into the Chebera Churchura National Park.  And as you head out for your trip to the Park, you will have to pack appropriately depending on the activities that you will be carrying out in the Park.