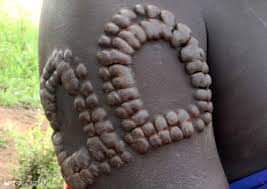 The Bume are also known as the Nyangatom. the Bume live west of the Dasenech people, south- west of the Karo people, south of the Surma people and North of the Ethio- Kenyan boundary. They occasionally migrate into the lower regions of the Omo national park when water or grazing is scarce.

Numbering around 6,000 in population, the Bume speak one of the Omotic group languages – Nyangatom. They are agro- pastoralists, relying on cattle herding and flood-retreat agriculture (consisting mainly of sorghum harvesting on the Omo and Kibish Rivers). In other words, they are semi-nomadic hunters and cattle-herders by custom, measuring their wealth in terms of the size of their herd, though flood agriculture now plays and increasingly important role in their subsistence. They tend to indulge in honey and frequently smoke out beehives to get the honey inside the nests.

The Bume are known to be great warriors and, quite frequently, active warmongers. Although they are peaceful and welcoming, they conflict with the neighboring tribes including the Hammer, the Karo and the Surma.
Kangate is the get way for accessing the habitation of the Bume from the east of Omo River. The crossing of the Omo river, although need to have time to do that) to the west enables one to see their small hat villages well.