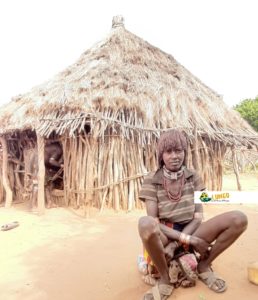 The Hamar live in the Southern Omo Zone, or Omo Valley, near the Kenyan border. Their name is also spelled Hamer.

The southern part of the Omo Valley is known as the ‘poisoned paradise’: the landscape is beautiful but climatic conditions are simply too hot and dry to be conducive to good health and longevity. Not surprisingly, people over 45 years old are a rarity in these parts. This pastural semi-nomadic people numbers about 50,000.

The Hamar share traditions and rituals with surrounding peoples like the Tsamai, Aari, Banna, and Bashada. One of these traditions is the so-called ‘jumping over the bull’. If a young man wants to marry the girl of his choice he will have to jump over bulls picked by the girl’s family. He is required to jump over them four times: two times in each direction. He is assisted by friends (called the ‘maz’); those who have successfully performed the jumping in previous years. They (try to) hold the cattle to prevent the young candidate from falling. If the jumper fails, it is considered a bad sign and he will have another chance a year later. Not seldom will the people blame the wind in case of his failure, and will they allow the aspiring groom a second chance. If the groom-to-be succeeds, he may keep the girl in exchange for cattle given to her family. For two months the betrothed couple will share blood and milk (blood from the cow’s neck is mixed with her milk and drunk). A wealthy, strong man may marry up to four women.

Some other aspects are remarkable: the Hamar are seriously pre-occupied with their appearance. They have at times spectular coiffures, especially the men. Even their way of sleeping is determined by their hair-do, as they use a wooden pillow that prevents the hair from touching the ground. They have three names: a human name, a goat name, and a cow name, which emphasizes the enormous role of cattle in their lives. Worth mentioning is the initiation ceremony for young men: they have to run over the backs of thirty cows standing side by side – four times, falling not allowed.

The Hamar live among the bush covered hills on the eastern side of the Omo Valley in southern Ethiopia. They are a tribe with unique rituals such as a cattle-leaping ceremony that men go through in order to reach adulthood, whereupon young Hamar women get whipped to prove their love for their kinsmen.

The 50,000 to 55,000 members of the Hamar make their living as successful cattle herders and farmers. Once they hunted, but the wild pigs and small antelope have almost disappeared from the lands in which they live; and until 20 years ago, all ploughing was done by hand with digging sticks.

The land isn’t owned by individuals; it’s free for cultivation and grazing, just as fruit and berries are free for whoever collects them. The Hamar move on when the land is exhausted or overwhelmed by weeds.

Often families will pool their livestock and labour to herd their cattle together. In the dry season, whole families go to live in grazing camps with their herds, where they survive on milk and blood from the cattle. Just as for the other tribes in the valley, cattle and goats are at the heart of Hamar life. They provide the cornerstone of a household’s livelihood; it’s only with cattle and goats to pay as ‘bride wealth’ that a man can marry.

There is a division of labour in terms of sex and age. The women and girls grow crops (the staple is sorghum, alongside beans, maize and pumpkins). They’re also responsible for collecting water, doing the cooking and looking after the children – who start helping the family by herding the goats from around the age of eight. The young men of the village work the crops, defend the herds or go off raiding for livestock from other tribes, while adult men herd the cattle, plough with oxen and raise beehives in acacia trees.

Sometimes, for a task like raising a new roof or getting the harvest in, a woman will invite her neighbours to join her in a work party in return for beer or a meal of goat, specially slaughtered to feed them.

Relations with neighbouring tribes vary. Cattle raids and counter-raids are a constant danger. The Hamar only marry members of their own tribe, but they have nothing against borrowing – songs, hairstyles, even names – from other tribes in the valley like the Nyangatom and the Dassanech.

Hamar parents have a lot of control over their sons, who herd the cattle and goats for the family. It’s the parents who give permission for the men to marry, and many don’t get married until their mid-thirties. Girls, on the other hand, tend to marry at about 17.

Marriage requires ‘bride wealth’, a payment made to the woman’s family and generally made up of goats, cattle and guns. Although it’s paid over time like instalments of a bank loan, it’s so high (30 goats and 20 head of cattle) that it can’t usually be paid back in a lifetime.

One effect is that whenever a family has a lot of livestock, the wife’s and mother’s brothers will claim outstanding bride wealth debts. It means that Hamar men can’t stay wealthy and grow wealthier as their livestock is claimed by others. If a man can afford the bride wealth, he can have three or four wives. Women only marry one man.

Because men tend to be older than their wives, they often die first. Lots of Hamar households are headed by women who have survived their husbands – one study found an amazing 27 out of 39 married women were widows. A widow also has power over her husband’s younger brothers (and their livestock) if their parents are already dead.

Brothers and sisters are important to each other in other ways. The most dramatic example is the ritual whipping before a brother’s cattle-leaping ceremony.

A Hamar man comes of age by leaping over a line of cattle. It’s the ceremony which qualifies him to marry, own cattle and have children. The timing of the ceremony is up to the man’s parents and happens after harvest. As an invitation, the guests receive a strip of bark with a number of knots – one to cut off for each day that passes in the run up to the ceremony. They have several days of feasting and drinking sorghum beer in prospect.

On the afternoon of the leap, the man’s female relatives demand to be whipped as part of the ceremony. The girls go out to meet the Maza, the ones who will whip them – a group of men who have already leapt across the cattle, and live apart from the rest of the tribe, moving from ceremony to ceremony. The whipping appears to be consensual; the girls gather round and beg to be whipped on their backs. They don’t show the pain they must feel and they say they’re proud of the scars. They would look down on a woman who refuses to join in, but young girls are discouraged from getting whipped.

One effect of this ritual whipping is to create a strong debt between the young man and his sisters. If they face hard times in the future, he’ll remember them because of the pain they went through at his initiation. Her scars are a mark of how she suffered for her brother.

As for the young man leaping over the cattle, before the ceremony his head is partially shaved, he is rubbed with sand to wash away his sins, and smeared with dung to give him strength. Finally, strips of tree bark are strapped round his body in a cross, as a form of spiritual protection.

Meanwhile, the Maza and elders line up about 15 cows and castrated male cattle, which represent the women and children of the tribe. The cattle in turn are smeared with dung to make them slippery. To come of age, the man must leap across the line four times. If he falls it is a shame, but he can try again. If he is blind or lame he will be helped across the cattle by others. Only when he has been through this initiation rite can he marry the wife chosen for him by his parents, and start to build up his own herd. Once his marriage has been agreed upon he and his family are indebted to his wife’s family for marriage payments amounting to 30 goats and 20 cattle.