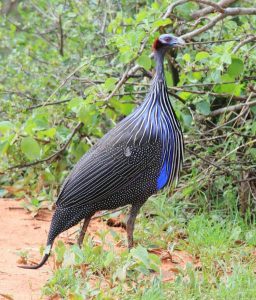 Abijata-Shalla National Park was established for its spectacular number of aquatic birds (the Great white Pelican and Lesser Flamingo) the bird breeding islands in Lake Shalla, and its scenery. It is a famous and significant Ornithological Site in the country. The park is located 207 km South of Addis Ababa on the Shashamene road within an altitude range of 1540-2075 m above sea level. The gateway to the park is located 56 kilometers from Zeway town at a place known as Dolle. As a result of its location, the park’s climate is generally dry with an annual rainfall range of between 500 and 700 mm during the two wet seasons; short rains in March and April and the long rains between June and September. Temperatures range between 50C and 450C.

The major attractions sites of the park are the scenic beauty of the Lakes and the wealth of birdlife they support. Abijata-Shalla National Park derives its name from the two lakes of Abijata and Shalla that together make up for over 50% of the total area. The park is one of the most scenically beautiful spots of Ethiopia, possessing a unique aspect of blue lakes fringed with flat-topped acacia trees and alive with a spectacular wealth of avifauna. The avifauna of the lakes is still in abundance and remains the major attractions of the locality.

A great number of the bird species that prevail in the lakes are the migrating wetland birds from Pala arctic transiting during the northern winter month’s seasonal migrants and the area thus is a paradise to ardent bird watchers. The lakes thus provide an important staging point for thousands birds including Shoveler, Black-winged Stilt, Avocet, Little Stint, Ruff and White-winged Black Tern. However, the bird of greatest interest to a nature lover and of concern to the world is the Great White Pelican. The Pelican breeds in its thousands (up to 12,000 pairs in the course of a year) on a small island, Tulu Island, in Lake Shalla. This Lake being too alkaline is of low biological productivity, so the birds do their fishing elsewhere, mainly in the northern waters of Lake Abijata. Lake Abijata is also specially known for the large number of Lesser Flamingo and as a major feeding ground for the Great White Pelican.  This park is accessible by road throughout the year.

Abijatta-Shalla National Park is one of the National Parks of Ethiopia. Located in the Oromia Region 200 kilometers south of Addis Ababa to the east of the Ziway  – Shashamane  high way, it contains 887 square kilometers including the Rift Valley lakes of Abijatta and Shalla. The two lakes are separated by three kilometers of hilly land. The altitude of the park ranges from 1540 to 2075 meters, the highest peak being Mount Fike, which is situated between the two lakes.

Besides the two lakes, the primary attraction of this national park are a number of hot springs on the northeast corner of Lake  Abijatta, and large numbers of flamingoes on the lake. Care must be exercised in driving vehicles out to the edge of this lake, as the thin crust of dried mud on the surface can give way without warning.

Situated in the Great Rift Valley, only 200 kilometers (124 miles) south of Addis Ababa, and in the Lake Langano recreational areas, the Abijatta Shalla lakes National Park attracts numerous visitors. Using Lake Langano as your base, it is an easy trip to visit the National Park, which is 887 square kilometers in size, 482 of these bei  ng water.

The altitude of the park ranges from 1540 to 2075 meters, the highest peak being mount Fike, situated between the two lakes. The network of tracks in this park is always developing. At present you can enter at four different points, three of which are inter connected. Approaching from Addis you first reach the Horakello entrance, where the small Horakello stream flows between lakes Langano and Abijatta.

It was created primarily for its aquatic bird life, particularly those that feed and breed on lakes Abijatta and Shalla in Large numbers. The park compresses the two lakes, the isthmus between them and a thin strip of land along the shorelines of each. Developments have been limited to a number of tracks on land, and the construction of seven outposts. While attention is focused on the water birds, the land area does contain a reasonable amount of other wildlife.

Two different lakes in one park, the two lakes are both terminal lakes and their beaches are unstable and saline, but they are very different in character. Abijatta is shallow at about 14 meters with a mysterious fluctuating water level. Fresh water flows into it trough the small Horakello stream. The steam mouth is a source of relatively fresh water, much frequented by water birds for drinking and bathing. The Lake is surrounded by gentle, grass covered slopes and acacia woodlands.

by contrast , surrounded as it is by steep, black cliffs and peaks that reflect in its waters, is the deepest lake of t  he Rift Valley (260 meters (853 feet). , It is exceptionally beautiful, with shores that give a scent of mystery with their hot sulphurous springs that bubble up and flow into the lake.

There are over 400 bird species recorded here, almost half the number recorded for the whole country. Although the islands in Lake Shalla are a real bird’s paradise, the birds fly to Lake Abijatta to feed. Abijatta itself is very alkaline but shallow, so flamingoes can be seen scattered over most of its surface, and especially along the windward edge where their algal food source concentrates. You can approach quite closely, but beware of treacherous deep and mud if the lake is low. Large numbers of flamingos gather here, together with great white pelicans and a wide variety of other water birds.

Besides of the rich Bird life, some mammals can be spotted at the Lake Abijatta-Shalla National Park, especially Grant’s gazelle, Oribi warthog and the Golden Jackal.

Hot springs: The headquarters houses a small museum, which gives an excellent idea of the wealth of bird life in the park. A further track leads on from Dole to the shores of Lake Shalla where hot steam, mud and water bubble to the earth’s surface. Revered locally for their medicinal properties, the hot springs have a sense of primeval mystery about hem, especially in the cooler early mornings. They are relics of the massive volcanic activity that has formed this amazing country and landscape.