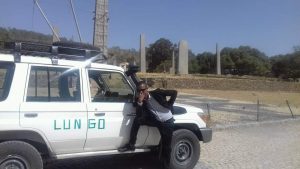 Axum – Home of the Arc of Covenant

Axum is described as home of the arc of covenant and the cradle of Ethiopian civilization. The more than three thousand years of history, stretching from queen of Sheba to the present day, is an enchantment to the visitors flocking this spectacular part of Ethiopia.

By the first century Axum was a major trading center; trading with Egypt, Rome, Greece, Syria and India. One of the major tour sites of Axum is its Stelae. The Stelae Park comprises of seven mysterious monolithic stelae from which Axum is identified. These dates between the 1st and the 3rd century AD and received recognition by the UNESCO in 1980.

The million dollar question is what happened to the Arc of the Covenant? The story begins with queen of Sheba (Saba) who reigned in Axum in the 10th century BC. Inspired by the tales she heard from her merchant, the queen paid an official visit to Jerusalem to meet this wise man known as King Solomon. She returned home enlightened and   pregnant with a child that would grow up to the Emperor Menelik I, the first in the Solomonic Dynasty, a Dynasty which would last until Emperor Haile Selassie I was overthrown nearly 3,000 years later. The 22-year –old Menelik I traveled to meet his father, who asked him to remain in Jerusalem to succeed him as king. When Menelik I declined, Solomon insisted him to be accompanied home by the first-born sons of important elders in the kingdom. Apparently, upset with their fate, some of the sons took the Arc of the Covenant from the temple and replaced it with a replica.

Legends say the Arc was kept in Axum until the 9th century A.D.  The arc was then secretly removed to avoid destruction during Queen Gudit’s religious purge. It was taken some 700 kilometers (435 miles) south to Tulu Guddo, an island in Lake Ziway, and kept there for 72 years and later returned to Axum, where it is found today, in Mariyam Tsion church.

Axum is also known for its amazing attraction sites spread over the wider area of the town. These include; Cathedral of St. Mary of Zion compound where the Arc of the Covenant is housed in a small chapel and  the great museum attached to the compound with  the collection of past Ethiopian history, Archeological museum (with fine ancient Sabean and early geez inscriptions, house hold objects, gold, silver and bronze coins and multilingual tablets dating from the time of Christ), Tombs of several kings spread in different areas with a variety of  architectures, the ruined palace and bath of queen of Sheba, as well as the spectacular monasteries which can be covered by half a day excursions.

CONSIDERING THE SIZE OF THE Obelisk of Axum, it is truly amazing that it was transported between continents twice during the last 100 years. However, for many people in Ethiopia, the return of the massive stele was an important milestone in bolstering national pride and celebrating Ethiopia’s history.

From the early 4th century B.C.E until the 10th century C.E, the Kingdom of Axum was one of the greatest powers on earth. Centered as a trade city between Persia and Rome, the city of Axum flourished in culture, power and wealth. A pagan Kingdom during its early peak, giant pillars were erected to mark the tombs of important leaders.

In the 4th century, the King Ezana of Axum solidified the Kingdom’s conversion to Christianity, and stopped all pagan practices, including the erection of burial stelea such as the 80-foot Obelisk of Axum. Standing only until the 16th century, an earthquake likely toppled the obelisk, and without any importance in a Christian society it was left in multiple pieces to disintegrate back into sand.

The Obelisk lay in ruin for hundreds of years until it was re-discovered by Italian soldiers during the conquest of Ethiopia in 1935. Brought back in three pieces, the 160-ton stele was taken as loot to Rome, where it was reassembled. After world war II, the UN ruled that the stele must be returned to Ethiopia, but complications arose almost immediately.

After years of fighting and delays, the Obelisk was finally returned to Ethiopia in 2007. The pieces were re-assembled and the Obelisk was placed near two other famous stelea; the Great Stelea standing at 108 feet, and the King Ezana stele, erected to the King that outlawed their use when he brought Christianity to his kingdom.
Aksum Tsion church is in Tigray region, North Ethiopia, but Tsion Mariam is celebrated across Ethiopia Aksum Tsion, in northern Ethiopia, is one of the sacred places for the faithful of Ethiopian Orthodox Tewahdo Church, believed to be well over 40 million according to recent statistics.

The church in Axum Tsion is as old as Christianity in Ethiopia. The city of Axum itself was a seat of Axumite Kingdom in the ancient time, one of the strongest Christian Kingdoms outside of Europe. An elaborate Obelisk of more than 24 meters from that era still stands in the city and is one tourist attraction sites in Ethiopia. Christians, or anyone, who are into visiting a sacred site, Axum is a destination worth traveling to.

Emperor Fasiledes is said to have to rebuild the church after destruction by Ahmed Ibn Ibrahim Al Gazi ( also known as Ahmed Grange) in the 16th century.

The elaborate current church structure was built by Emperor Haileselassie, the last powerful emperor of Ethiopia, in the 1950’s. The construction was completed in 1964. He also built a chapel nearby to house what the faithful of the church value most – Ark of the Covenant – tablets of the Ten Commandments that Mosses received from God on the Sainai.

Today, Hidar 21 in Ethiopian Calendar, followers of the Ethiopian church celebrate St Mary of Tsion in the city of Axum. Millions of Ethiopians travel to Axum for pilgrimage. Those who can not make it to Axum always celebrate in their own cities and towns. As in many other holidays of the Ethiopian Church, Replicas Ark of the Covenant will be taken from its Altar and carried by a priest for a solemn and colorful procession. Archaeologists find Queen of Sheba’s palace at Axum, Ethiopia Archaeologists believe they have found the Queen of Sheba’s palace at Axum, Ethiopia and an altar which held the most precious treasure of ancient Judaism, the Ark of the Covenant, the University of Hamburg said Wednesday. Scientists from the German city made the startling find during their spring excavation of the site over the past three months.

The Ethiopian queen was the bride of King Solomon of Israel in the 10th century before the Christian era. The royal match is among the memorable events in the Bible.

Ethiopian tradition claims the Ark, which allegedly contained Moses’ stone tablets on which the Ten Commandments were written, was smuggled to Ethiopia by their son Menelek and is still in that country.

The University said scientists led by Helmut Ziegert had found remains of a 10th-century-BC palace at Axum-Dungur under the palace of a later Christian king. There was evidence the early palace had been torn down and realigned to the path of the star Sirius.

The team hypothesized that Menelek had changed religion and become a worshipper of Sirius while keeping the Ark, described in the Bible as an acacia-wood chest covered with gold. Remains of sacrifices of bullocks were evident around the altar.

The research at Axum, which began in 1999, is aimed at documenting the origins of the Ethiopian state and the Ethiopian Orthodox Church.

“The results we have suggest that a Cult of Sothis developed in Ethiopia with the arrival of Judaism and the Ark of the Covenant and continued until 600 AD,” the announcement said. Sothis is the ancient Greek name for a star thought to be Sirius.

The team said evidence for this included Sirius symbols at the site, the debris of sacrifices and the alignment of sacred buildings to the rising-point of Sirius, the brightest star in the sky.