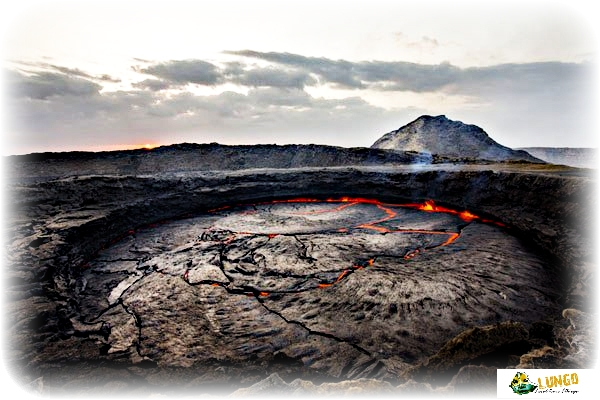 Day 1
Together with lungo local tour Ethiopia Early morning fly from addis to mekele then after from Mekele to Askoma Via Abaala/New Ertale volcano We start early via Abala to the New Erta Ale volcano, shortly after at 06:30 breakfast, and drive to Askoma at the base of new Erta Ale. The 180 km distance may take about 6 to 7 hrs passing through changing landscape of solidified lava, rock, sand and the occasional palm lined oasis. You pass several small hamlets scattered here and there in this
desert land, before reaching Askoma village or parking area. You will trek from Askoma to the new Erta Ale which takes about 4 hrs. Early
dinner around 17:00 and trek up to the new Erta Ale reach around 20:00. Camels transport all the camping materials and some food,
sleeping materials, mattresses and water, to the rim of the volcano, where we spend the night watching the dramatic action of the boiling
lava.

New Erta Ale is part of volcano mountain chain ranks one of the most alluring and physically challenging natural attractions anywhere
in Ethiopia. It is a shield volcano with a base diameter of 30 km and1km square caldera at its summit. New Erta Ale is part of the world’s
only permanent lava lake and you will spend an unforgettable night on the top of the mountain. The magma flow moved 3.5 kms south from old
Erta Ale to the New eruption point. over night at the rim of the Volacano.

Day2
Together with lungo local tour Ethiopia Early Morning sun rise at the northern one corresponds to the main pit crater and walk 5 minutes for the southern and central pits could
either corresponds to an ancient pit, or to a simple collapse structure. The main pit-crater, 200 m deep and 350 m across, is sub circular and three storied. The smaller southern pit is 65 m wide and
about 100 m deep. Descend from Erta Ale around 9 am Dodom – Leave back to Dodom after an early breakfast, if possible at 07:00. You will reach latest at 10:30 am at the camp, time to relax.

After
Together with lungo local tour Ethiopia drive to the mythical Lake Giulietti (or lake Afrera), a salt water lake located more than100 meters below sea level, in one of the deepest depressions of the planet. Because of the picturesque
landscape, it is interesting to visit the salt flats where the Afar people obtain the salt by evaporating the water of the lake.reach Eript, better village with a total population about 500 people. Drive to Erbiti and proceed to Mekele. 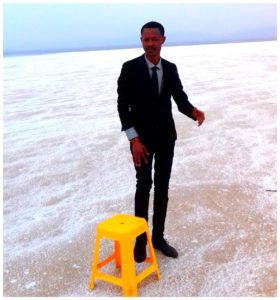