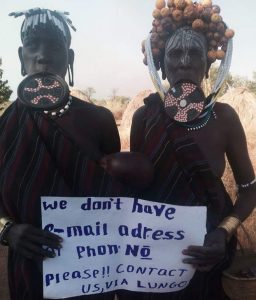 Surma are people of Nilotic origin, similar to Mursi, who live on the western shore of the river Omo, at the border of the Omo Park. The itineraries we propose combine the trekking in this far region of Ethiopia with a journey by off road vehicles through the Keffa areas, Illubabor and Welega regions or with the more classic Mago Park and the Rift Valley. A journey in regions almost unknown to tourism: the coffee and the ancient Sidamo Kingdom region, the region of the subtropical wood and of the Nuer and Anuak tribes.

The girl pictured here shows some of the typical Surma characteristics for both men and women: large earplugs, decorative body painting, the hair shaved in patterns. Women wear a leather garment fastened at one shoulder which encircles the waist like a skirt. Men and children typically wear no clothing. Surma women are noted for the large clay lip plates worn in the lower lip.

Donga : is a stick fighting festival of the Surma young men. At a fight, each challenger is armed with a hardwood stick. Each player beats his opponent with his stick as many times as possible with the intention of knocking him down, and eliminating him from the game. Players are usually unmarried men. The winner will be carried on a platform of poles to a group of girls waiting at the open field. The winner holds the privilege to ask among those girls for his own wife.