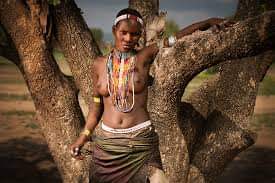 The Tsemai, the dominant people of Weito village on the Konso-Jinka road, are regarded to be among the least known ethnic groups of Ethiopia. Estimated to be a total of some 5000 people, their territory extends along the western bank of the Weito River, known in Tsemai as the Dulaika River. They are mixed subsistence farmers who practice flood cultivation, with the major crops being sorghum and maize. They also rear livestock, especially cattle, and keep beehives for honey.

The Tsemai speak an Omotic language with an influence of Eastern Cushitic language that is closely related to the one spoken in Konso, which, according to oral tradition, is from where their founding chief Asasa originated. The present chief, who lives at the long-standing Tsemai capital of Ganda Bogolkila, is claimed to be the ninth in line after Asasa, suggesting that this migration might have happened between 150 and 250 years ago.

Although their appearance and dress style is similar to that of the Omotic Ari people, the Tsemai share closer political and spiritual affiliations with the Erbore, who speak a similar language, and whose territory lies adjacent to the Tsemai chief’s village. The Tsemai also frequently and openly intermarry with the Hammer, whose territory lies immediately west of theirs. In common with many other people of southern Ethiopia, society is structured around and age set system. Four fixed age sets are recognized, with every set graduating in seniority once a decade, when a new generation of boys between the ages of about 11 and 22 is initiated.