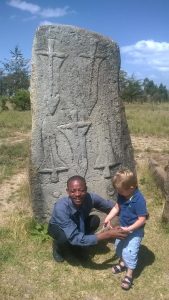 Tiya is best known for its archeological site, which is distinguished by 36 standing stones or stele, “32 of which are engraved with enigmatic symbols, notably swords,” marks a large, prehistoric burial complex. Tiya is the most important of some 160 archaeological sites in the Soddo region, 85 KM south of Addis Ababa, in Ethiopia.

The Tiya stones are part of an archaeological site located in central Ethiopia, in an area known as the Gurage Zone. The 46 large, decorated Tiya megaliths have been declared a UNESCO World Heritage Site. Although the construction of such megaliths is an ancient tradition in Ethiopia, the Tiya stones are fairly ‘recent’, dating to sometime between the 10 th and 15 thcenturies. Remarkably little is known about the Tiya stelae, beyond descriptions of their physical appearance. These large monuments likely had some cultural significance when erected, but their meaning remains unclear and very few efforts have been made towards understanding these magnificent monoliths.

The town of Tiya is found in central Ethiopia, located in the Soddo Region, in an area known as the Gurage Zone. Over 100 stelae can be found scattered across nine distinct megalithic pillar sites within the zone, 46 of which can be found at Tiya.

The pillar sites contain large stelae (monuments) of three types – anthropomorphic, phallic, and non-anthropomorphic/non-phallic. Anthropomorphic stelae are those which are given a human form. Phallic stelae are tall, thin shafts. The final stelae are flat monuments that take on neither an anthropomorphic nor phallic form, yet still take on the same basic form as the other megaliths. Each of these types of stelae are prominent within the nine sites of the Gurage Zone. Additionally, most of the stelae in the Gurage Zone contain elaborate decorations, including symbols that resemble plants, swords, and human figures, standing “akimbo,” with their hands on their hips and elbows turned out.